Éric Vuillard - The War of the Poor 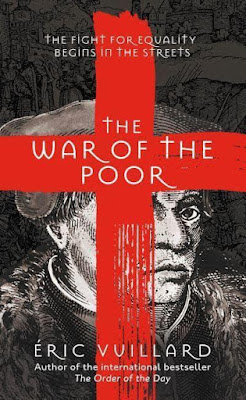 Almost five hundred years ago in 1525 in the midst of the Protestant Reformation, the German Peasant began - a movement of the poor, downtrodden, oppressed and exploited masses which terrified kings, bishops and popes. At the heart of this movement was the iconic figure of Thomas Müntzer. His radical interpretations of the bible, and his desire to teach the masses to understand the bible for themselves meant that he broke both of the established Catholic Church and from the less radical ideas of Martin Luther.

In Éric Vuillard's short, but powerful, autobiographical account Müntzer explodes onto the historical scene. His evangelical preaching is for "the whole world" not a privileged few. He doesn't translate the bible into the vernacular he teaches it to those who cannot read. "Is he insane?" ask his critics? Vuillard says "Müntzer is a voice. He cries out that, princes or servants, rich or poor, God moulded us from the same gutter mud, whittled us from the same sandalwood."

It's a voice of radicalism that speaks to us across the ages:

Behold I have put my words in your mouth; I have this day set you over the nations and over the kingdoms, to root out and to pull down, and to destroy and to thrown down to build, and to plant... Try as they may to fight against you, a wonderful victory is prepared for the downfall of the strong and godless tyrants."

In words that send a chill down the spine Müntzer urges: "Dear brethren, stop your delaying and hesitating! The time has come, the summer is knocking at our doors".

Rebellion in language the peasants could understand. The summer is oft dreamed of, especially in the dark of winter. And so they came. Like they did in the Summer of 1381, when John Ball, Jack Straw and Wat Tyler nearly brought down the "flower" of English chivalry. Its a story told briefly by Vuillard to frame 1525 - to show that Müntzer and Ball's messages were not isolated ideologies, but living breathing hopes of thousands.

In Germany in 1525 peasant armies marched, laid siege, burnt manor houses and castles, and were massacred by the princes' heavy cavalry. Müntzer is taken to the block, but against those who tell of his cowardice at the end, Vuillard rails that those "legends come along to bow the heads of renegades" to "to make the tormenting voice sound within us, the voice of order." For Vuillard this was a life to be emulated, to be celebrated, not for Müntzer's martyrdom, but for his message of revolution.

It's a fine message, in a fine short book.

"Summer is knocking at our doors."

Posted by Resolute Reader at 6:37 pm

I'm rereading Wolf Hall and Bring Up the Bodies atm, the reformation is often discussed/debated by the characters. They seem to generally against any thought of the populace rising up against the gentry, but seem happy to use the change in religious thought and practice as something to help them move away from the control and interference of the Pope and the Catholic Church. Very interesting times indeed!