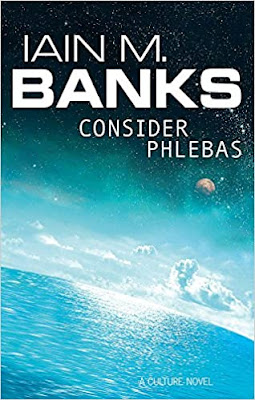 Re-reading Consider Phlebas many years after I was first enthralled by it, I was immediately reminded how great the scope of Iain M. Banks' science fiction was. As the first Culture novel, Banks introduces not one, but two galaxy spanning civilizations and places them at war with each other. We learn the intricacies of the Culture by seeing them through the eyes of outsides - indeed hated enemies.

The book follows a crew of characters led by a changer Bora Horza Gobuchul who is an enemy of the Culture, but a temporary ally of their enemies the Idirans. Bora change adjust his body to mimic others and uses this in his role doing underhand jobs as part of the war. The book follows his adventures trying to capture one of the Culture's AIs that has been trapped inside a planet that was caved out by an ancient civilisation. Bora (and his crew) form a microcosm of the larger galactic conflict, an adventure that illuminates the wider galaxy. It's a tremendously satisfying space opera - there's plenty of massive scale action, including a brilliant set-piece as an enormous orbital habitat is destroyed by the Culture to prevent the Idirans capturing it. It symbolises the resources that the society has - and are prepared to sacrifice in order to win the war. But the scale allows Banks to play with all sorts of ideas - a race against time to loot some equipment and a fantastic card game played as the habitat rapidly approaches the end.

While re-reading Consider Phlebas it is hard to remember how I felt the first time I read it. Who are the Culture? Who are the good guys and the bad guys? What are these Minds? Some of these questions are also asked by characters in the novel itself. But they also go to the heart of what the Culture is, and themes that Banks would return to time and again in his later novels. I used to consider Bank's book Player of Games the best introduction to the universe he constructed, but on re-reading Consider Phlebas I am not so sure. It is less overtly political than Player but as the base for the rest of the superstructure it works extremely well. More importantly it's a cracking space opera that still feels fresh over thirty years since it was first published.

Posted by Resolute Reader at 5:30 pm