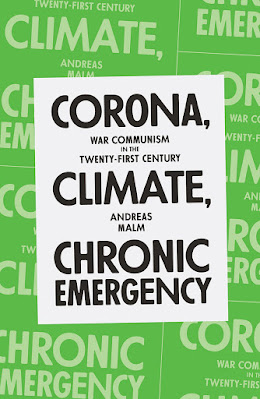 Andreas Malm's 2016 book Fossil Capital was an important exploration of how capitalism developed into a fossil fuel system. In explaining fossil fuel capitalism Malm placed the question of human labour alongside that of energy and thus showed that the central question for environmentalists was anti-capitalist politics. His 2017 The Progress of this Storm was a polemical defence of Marxist politics for the struggle against fossil capital. With his latest book Corona, Climate, Chronic Emergency Malm argues that the twin crises of Covid-19 pandemic and climate change demand an "ecological Leninism" that can wield "War Communism" in order to end capitalism and reconstruct a world where accumulation doesn't drive disease spillover and environmental breakdown.

It's a tour-de-force that asks difficult questions and doesn't shirk from giving difficult answers. Malm begins by asking a relatively simple question which has troubled the minds of many environmentalists since Coronavirus exploded across the globe: "Why did the states of the global North act on corona but not on climate?" Malm shows that there are many answers, some of which are simple (Trump doesn't believe in climate change) others more plausible (acting on climate change is 'bewilderingly complex'). But none of them stand up to scrutiny because, as Malm points out the answer lies in understanding the nature of the system itself.

Simply put, with all their limitations and failures, governments were prepared to temporarily shutdown their system to deal with Covid-19. But acting on climate change required action on a whole different level. Covid-19 did not, as Malm eloquently puts it, "emanate directly from the chimneys of accumulation" like carbon dioxide does. CO2 is the direct resultant of capitalist accumulation in a fossil fuel system and thus "there are interests at stake in its continued release". So,

an enemy of higher order must be overcome, and not for a month or a year or two: the shutdown of fossil capital would have to be permanent.

And this requires "a more thoroughgoing breakdown of private property" one that would "bury forms of capital for good. It would be something more akin to war communism".

But the question of the different treatment of the Covid and climate change should not blind us to an important reality. Malm points out that both crises have their origins in capitalism. The first half of the book is a devastating critique of how capitalism drives pandemics. There are multiple ways that this happens. The principle one is the transformation of land use by agribusiness. There are a myriad of ways that this can drive potential spillover - the process, known to scientists as Zoonosis - whereby disease leaps boundaries from one small reservoir among wild animals into domestic animals and thence onto humans. One of these, and one that I'd not considered, is the hunting of bushmeat - which Malm points out is actually driven by elite consumption. Another is the way biodiversity lose can concentrate the potential for disease evolution. But most importantly there's the question of deforestation.

We should be very clear that it is deforestation driven by the interests of big business that is the biggest problem and the biggest driver of disease. As Malm explains:

In the new millennium, it is the production of commodities that chews up tropical forests. It negates diversity on every front. No more than four commodities - beef, soybean, palm oil and wood products, in descending order of impact - accounted for four tenths of the dramatically sped-up tropical deforestation between 2000 and 2011.

Quoting Marxist writer Rob Wallace, Malm points out that "'opening the forests to global circuits of capital' is in itself 'a primary cause' of all this sickness."

Those of us in and around the environmental movement in the 1980s and 1990s will recall that opposition to deforestation was the principal issue motivating campaigners in those decades. But despite this deforestation accelerated in the decade afterward. Those campaigns ("buy an acre of the amazon" or "sign this letter") in the 1980s failed to stop deforestation in any way. It's a point that Malm could have made to emphasise his central point - that without a challenge to capital we are lost in preventing environmental collapse or the emergence of future pandemics.

What is the answer? Here Malm raises what is likely to be the most controversial aspect to his book - ecological Leninism and War Communism. But, and I think this is tremendously importance, Malm is placing Leninist theory and practice at the heart of discussions about what to do. He begins by raising an argument that Lenin made in September 1917. In the midst of World War One, Lenin pointed out that everyone recognised that Russia faced disaster, but no-one, except the Bolsheviks were prepared to do what was necessary - lead a revolution. The problem for everyone else is that they wanted to leave the system intact, but it was the system that was causing war, famine, poverty and rebellion.

Similarly those who (on the left as well as the right) who say that the answer to Covid is a vaccine and  better healthcare or put their faith in geo-engineering and sustainable technology, are making the same mistake. Humanity will survive Covid-19 on this strategy. But Covid-21 or 22 is just around the corner. Similarly trying to fix climate change within a fossil fuel capitalism is also impossible as there's no way (as Malm shows) of extracting CO2 from the air and making a profit. The only solution to more pandemics and climate change is a challenge to the system.

Lenin's practice then, of "turning the crises of symptoms into a crises of the causes" is apposite here. And in doing so, we have to abandon the utopianism of some on the radical left. Malm challenges those anarchists who say that the problem is the state, by making the point that what Covid shows is that a state that can plan, offer healthcare, mandate shutdowns and, presumably protect jobs, income and welfare, is absolutely required. Here then is the War Communism of the title. Its a state system that directly takes on the polluters and the deforesters. Its a system that can implement the urgent changes that are needed to stop future spillovers and act on climate change. It won't be easy, but as Malm points out:

As any transition is hard to conceive without popular-democratic ferment, tensions along a vertical axis may ensue. All this is, of course, prely in the realm of speculation, but we now face the more imminent problem of authoritarian degeneration in periods of symptomatic treatment such as lockdown. Some bourgeois states - those on the far right - will have no compunctions about extending their repressive powers towards proto-fascism.

"The future", Malm continues is

ecological war communism, in a figurative sense, this being 'only an analogy - but an analogy very rich in content'. It means learning to live without fossil fuels in no time, breaking the resistance of dominant classes, transforming the economy for the duration, refusing to give up even if all the worst-case scenarios come true, rising out of the ruins with the force and the compromises required, organising the transitional period of restoration, staying with the dilemma.

The lessons of Leninism aren't just about revolution and organisation of course. Malm touches on the importance that the fledgling Communist state gives to the protection of nature, a choice whose legacy means that Russia today still has the largest areas of untouched nature in the world.

This book was written early in the first wave of Covid-19. I read it in the early stages of the UK's second wave. While the material is frightening, the clarity of politics at the heart of Corona, Climate, Chronic Emergency, was a breath of hope. The challenge for all of us is to rebuild the political organisations that can drive through the change that is required. Andreas Malm's book provides ammunition for that struggle. Its a task we cannot fail at.

Malm - The Progress of This Storm: Nature & Society in a Warming World
Malm - Fossil Capital: The Rise of Steam Power and the Roots of Global Warming
Foster - Marx's Ecology
Burkett - Marx and Nature
Angus - Facing the Anthropocene: Fossil Capitalism and the crisis of the Earth System
Dawson - Extinction: A Radical History
Dawson - People's Power: Reclaiming the Energy Commons
Posted by Resolute Reader at 8:45 pm