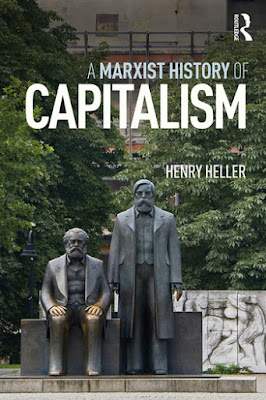 I have previously reviewed and enthused about Henry Heller's writing on the transition from feudalism to capitalism, so I was excited to read this short book in which Heller explains the history of capitalist from a Marxist viewpoint. The opening chapters focus on the transition from feudalism to Merchant capitalism. These are an extremely accessible short guide to the debates and summarise Heller's longer work elsewhere. He makes some interesting points which are worth noting. For instance, he insists that capitalism was a global system from the start. It didn't simply start in north-western Europe and spread, but was highly dependent on trade and resources with the rest of the globe. He also understands the role of the state and class struggle in pushing forward the development of the capitalist means of production:

It was upper-class demand for more surplus and peasant resistance that created conflict and drove history forward. With the appearance of the capitalist class in the sixteenth century the goal of the upper class changed. The primary goal of this now profit-seeking class was no longer consumption but the accumulation of capital... The revolutionary character of this development has to be underscored. Consumption of wealth became entirely subordinate to its accumulation, the necessity of which was intrinsic to the new mode of production. That is why the debut of the capitalist mode of production in the sixteenth century represented a qualitative historical breakthrough.

In the chapters on the development of capitalism Heller does an excellent job of summarising the problems with political Marxist arguments like those of Robert Brenner. Again these are useful summaries, but Heller's detailed arguments elsewhere repay reading.

However it is in the second half of the book where I felt Heller comes unstuck and his book becomes problematic. While his analysis of the development of capitalism, and in particular the shape of neo-liberalism remains strong, it is hampered by his insistence on actually existing socialism in the Soviet Union and countries like China. For instance he characterises the second half of the twentieth century as seeing a Cold War between "the forces of capitalist imperialism on the one hand and revolutionary socialism and national liberation on the other".

The problem is that the USSR certainly was no longer a socialist society from the late 1920s onward. Neither it, nor countries like China, can claim that mantle given the complete lack of workers' democratic control over the means of production, and the fact that their economies were driven by accumulation in competition with the West, primarily through the arms race. To characterise China  today as "half socialist and half capitalist" is to remove the essence of what Marxists mean by socialism - workers' power - and insist that it simply means nationalised industry.

Heller also argues that Marx said in Capital III that "that capitalism is likely to implode by virtue of its own contradictions". At times Heller's writing implies we are very close to such a transition. He argues, for instance, that the ruling class should have nationalised the banks in the aftermath of the 2008 crisis. They didn't, but he says that the fact this was a "real alternative" demonstrates "how close we are to a sudden end of capitalism and the dawn of socialism". But this is only true if we see socialism as just about the nationalisation of sections of the economy. If we see socialism as being based on the power of workers councils etc then we are a lot further from the dawn than Heller contends.

Given how much I enjoyed Heller's early book I was very disappointed by this short work. At slightly less than 150 pages it is a quick read, but its academic price tag means that it hardly represents value for money or is accessible to working people. Readers should get it from the library, but read it primarily for its excellent historical analysis and less for its problematic discussions about the transition to socialism.

Posted by Resolute Reader at 7:29 pm