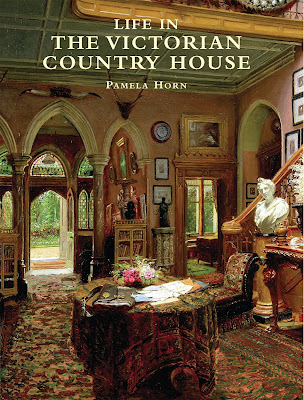 The English country houses of the Victorian and Edwardian era are a source of endless fascination. From Brideshead Revisited to Downtown Abbey the potential for conflict and gossip both upstairs and downstairs attracts authors and TV executives. As this book by historian Pamela Horn shows the history of these houses is endlessly fascinating, not least because they represented extremes of wealth and class differentials in the countryside.

Some of the houses were enormous, but even minor country houses represented wealth and power in the countryside. The wealth came, almost entirely from agriculture on the massive lands owned by the lords in the houses. Later this was sometimes supplemented, particularly during the agricultural depression of the post-Napoleonic war era, by exploitation of other resources such as coal. But in the main the money came from agriculture. The fame of these houses and the families that resided in them, often for hundreds of years, far surpassed their numerical importance. The aristocracy, Horn explains, numbered just three hundred families when they were the richest landowners, growing to 450 by 1885. By 1914 "newly ennobled financiers, industrialists and other businessmen" took the number to over 570. Many of these "were in possession of... at least 1,000 acres considered necessary to support the lifestyle of a mid-Victorian landed gentlemen".

To manage the lavish lifestyles required dozens of servants and a great strength of Horn's book is that she explores the close relations between the two. These must have been suffocating at times, as the family followed strict timetables and the numbers of servants in at least one case, meant that at least one lady was rarely able to see her own children. But what stands out is the stifling restrictions of life for the servants. They were restricted by their station - low paid, constantly at risk of dismissal and working extremely long hours at the whim of often deeply unpleasant masters.

But the rich too were also sometimes limited by their own station. In particular the women who were often little more than bargaining chips in arranged marriages between great families. Not a few of the reminisces from society ladies in Horn's book bemoan the boredom of life - subject to a strictly regimented timetable and unable to do anything unladylike. One woman who talked of guests at a house part moving the clock forward so they could go to bed at the approved hour of 11 o'clock.

That said the pampered lives of the aristocracy meant that the lived in luxury unknown to the mass of the population. A tiny few, such as Lady Warwick, noticed this and played a small role in trying alleviate poverty and challenge the system. But these were very much the outsiders. The rest were happy to lord it over everyone else - often with such wealth that they didn't know what to do with it. Horn mentions one landowner who was known to have "eight houses but no home".

While I found the book engaging and detailed, I was disappointed to not have more about how the landowners related to the tenant farmers and the wider community. This book is very much focused on life "in" the houses, but this can't really be separated from the wider social and economic relations in the countryside. Nonetheless this is a fun and interesting book, as well as being lavishly illustrated with fascinating photos, adverts and pictures. It did leave me with one question though - why on Earth didn't we cut off the heads of the aristocracy?

Posted by Resolute Reader at 7:03 pm

Thanks for the heads-up about this title. I adore social history so appreciate your post. Thanks again.