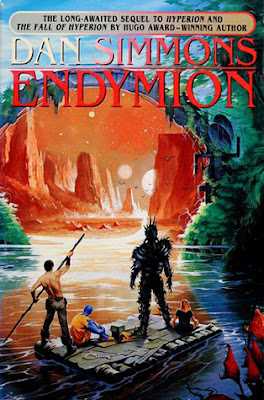 Endymion is the third part of Dan Simmons Hyperion Cantos. While the second two books form an independent story, readers would be well advised to read the first two books which set the scene for the final half of the story. But readers should also check them out first because they are a brilliant and very well told story.

Endymion itself is set several hundred years after the events of The Fall of Hyperion. It begins with Raoul Endymion in prison facing a death sentence "for the second time". Trapped in a Schrodinger's box execution, awaiting the emission of a random radioactive particle that will trigger poison gas, he tells his story and how it is tied up with the daughter of two of the first books' main characters Aenea.

Nearly three hundred years before the start of this story Aenea entered the time-tombs on Hyperion and is set to leave them. Raoul, escaping from his first death sentence through the intervention of the aged poet Martin Silenus (one of the few characters to make it into the second half of the Cantos), learns that he has to rescue Aenea from the clutches of a now galactic wide, resurrected, Catholic Church.

The rescue leads to a novel length chase, as Raoul and the child Aenea travel along the River Thethys, visiting world after world, hunted by Father de Soya for the Church. Alongside Soya are several powerful bionic AIs that are also hunting Aenea and various other forces that are vying for Galactic position.

In the first book of the Cantos, Hyperion, part of the brilliance was the different stories told by the participants in a pilgrimage to the Time Tombs. Brilliantly Simmons eschewed this format for the second book, taking the story and the style to new places. In volume three the chase from planet to planet allows Simmons to elaborate about the universe he has created, exploring the role of the Church, as well as the people who live under (or resist) its rule. Simmons is at his best when he tells these background stories - sometimes they serve to tell us about the universe of the books, or develop the key characters. At other times they are whimsical explorations of alien life and culture. The frozen world of Sol Draconi is one example - here the hunter-gatherer natives scratch a bare living, threatened by monstrous local animals that kills them regularly. Trying to find a route off the planet Raoul and Aenea encounter a philosophical, blind priest. It's a touching break in a seemingly endless chase.

Much of the background detail on these planets turns out to be highly relevant, as it seems that the Church isn't the only galactic force trying to shape the future of humanity. The novel ends with Aenea settling down on Old Earth (albeit an Earth transported to the Large Magellanic Cloud and managed by AIs) to develop her own understanding. Raoul explores old Earth, with adventures he refers to only tantalizing, realising he needs to finish writing before radioactive decay forces his wave-function into a particular collapsed state. Raoul, it should be said, spends much of both books confused about his role and purpose, simultaneously a hero of the story and a substitute for the reader who will have to read right to the end of volume four to finally understand what's happening.