Dan Simmons - The Fall of Hyperion 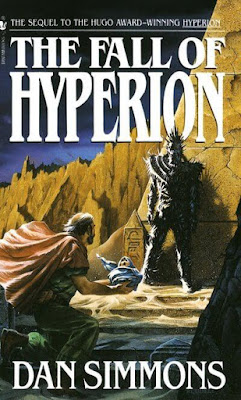 The Fall of Hyperion is a very different novel to the previous book in this series by Dan Simmons, but it is still a remarkably rich and detailed book that repays careful reading. The ending of Hyperion saw the Hegemony of Man under external threat as the Ouster's attack the worlds on the fringe of its web of connections.  On Hyperion itself the depleted band of pilgrims from Hyperion are at the Time Tombs and facing the Shrike. Their experiences are relayed back telepathically to an AI who has taken the form of the poet John Keats, and has the ear of the Hegemony's CEO Meina Gladstone. Gladstone uses this info as part of a tense struggle within the government about how to deal with the invasion.

Gradually it becomes clear that there are deeper forces at work, that connect Hyperion, the Shrike and different forces within human and non-human space. It takes the whole novel to unpick what these relations are, and like the first book Simmons makes every word relevant in understanding what it is happening. While the story jumps back and forth in time, and across space, making things difficult to understand the immense detail creates a wonderful background to the main action.

An additional confusion is caused by the AI character John Keats. He is both Keats and Keat's companion Joseph Severn the guise in which he is known to Gladstone. As the novel progresses he increasingly takes on the character of Keats and is transported to an artificially constructed 18th century Rome where he lives out the end of Keats' life. The reader needs to keep their wits about them to keep track of the multiple personalities, locations and time zones. But it is Keats who is the fulcrum by which humanity (and the reader) learns about what is actually happening.

At times Fall of Hyperion feels a little overwhelming, and certainly it might leave the reader gasping for breath. But Simmons manages to juggle multiple time lines and characters very well. He's also got an eye for period detail and a great knowledge of Keat's life and poetry, as well as building on the universe set out in Hyperion. I found the ending remarkably satisfying and it is a fitting sequel to the first book. Again, highly recommended.

Posted by Resolute Reader at 8:55 pm