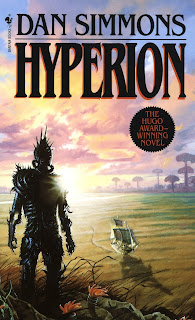 Hyperion, the first of a series of novels by Dan Simmons, is often listed as one of the greatest science fiction novels of all time. It is a work that transcends genres, and were it not labelled science fiction would probably be considered a great work of literature. But sadly it is relatively ignored beyond the ranks of SF&F fandom. This is a shame, because it is a remarkable work.

It draws inspiration from The Canterbury Tales. A motley crew of characters is placed on the planet Hyperion. Hyperion is a planet that is loosely connected to the Hegemony of Man - humans have managed to travel the galaxy using star ships, but their planets are mostly connected by a web of portals, technology given to them by a civilisation of AIs. These portals allow instantaneous communication and travel between planets. Inevitably humans have taken this wonderful technology and use it for wholly unremarkable purposes - having the different rooms in a house on different planets for instance.

Hyperion however is different to other planets. On it are the Time Tombs, inexplicable structures that are travelling backwards in time and are guarded by a violent monster known as the Shrike. The Tombs and the Shrike have attracted tourists, archaeologists and pilgrims who form a malevolent religion known as the Church of the Final Atonement.

Galactically a third force, the Ousters, humans who have evolved to live in deep space, challenge the Hegemony. On the eve of an attack on human space by the Ousters, a final pilgrimage to the Time Tombs sets off. Its members are a hand-picked but extremely disparate groups of people. As they travel across land (cleverly Simmons has ensured that even with humanity's portal technology and space-going vessels) no-one can fly to the Tombs, they exchange stories to explain how they arrived there.

As in The Canterbury Tales it is very much the stories that matter, not the journey. As we learn each of the party's background, by turns tragic, violent, poetic and romantic, we learn more about the universe of the Shrike and the Hegemony of Man. Nothing is as it seems, of course, and forces far beyond the small party have much invested in their success. It is the combination of stories and how Simmons unravels the world through them that make the novel such a classic work. Simmons has a neat way of painting a technological future without actually explaining the detail. We don't know how a hellwhip works, but the name of the weapon tells you everything you need to know.

I read this back to back with the follow up The Fall of Hyperion as the two make a continuous story though they are very different in approach. Both are highly recommended.

Posted by Resolute Reader at 6:49 pm