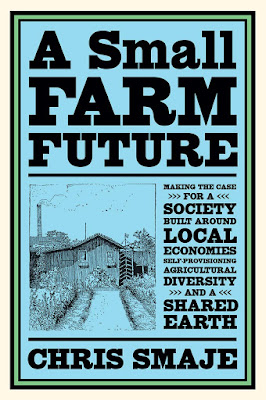 What sort of sustainable society does humanity need to survive the environmental and social crises we face? It is a question that is being grappled with by many different groups of people - from industrialists and technocrats to politicians and, most importantly, activists on the ground. This latter group are simultaneously challenging the status quo and trying to shape an alternative.

One key aspect to the current ecological crisis is agriculture. In the last decade food production has become an increasing preoccupation for many in the environmental movements. Part of this arises from a crude link drawn by some activists between consumption and ecological damage: "go vegan to save the world". But in most part it is because the capitalist food system is inherently destructive to the environment, the land, natural resources and those who labour in the industry.

So Chris Smaje's new book then is an intervention into contemporary debates. A practising farmer he is able to link his experiences of working in agriculture, running a small holding and selling produce to a wider critique of society. His title, A Small Farm Future, is an intervention into a long standing discussion about the nature of agriculture. Smaje says that we need to urgently move away from a capitalist economy that puts growth and accumulation before any other interest and return to a society that is inherently agricultural where farming is based on small units (specifically the family).

Smaje argues that a small farm future "would probably look a lot like the diffuse, rural world of premodern agriculture, oriented to skimming energetic flows rather than mining energetic stocks." It is well known that small-farm production, even as it is squeezed within capitalist production, can have better yields, be more sustainable, be cheaper and more resilient than industrial agriculture.

But Smaje warns "nobody wants to turn the clock back to the hardscrabble life of toil retained in folk memory from the small farm past."

The idea that it is the very nature of capitalism that is so destructive is common place within environmental movements today. What is more controversial is the question of small farm agriculture itself. The debate, which Smaje touchs on, goes back a long way. For instance in the late 19th and early 20th century left-thinkers like Karl Marx, Karl Kautsky and V.I. Lenin grappled with the surprising persistence of the peasantry. Classical Marxism suggested that the peasantry would fade away. Obviously it hasn't, and understanding why underpins aspects of Smaje's book. I've written elsewhere on this subject and won't be diverted. But one thing that is important is that much of the left argued that small farm, peasant agriculture was to be overcome because it was inefficient, poor and dominated by oppressive back-breaking work - it is also often characterised by the oppression of woman and children for their unpaid labour.

Smaje's argument for a return to small scale farming then begins by making it clear that he thinks that these problems with peasant agriculture can (and must) be overcome. We cannot have production that places extra burdens on women or children's labour for instance. I think he makes some good points.

We should probably start thinking about a small farm future with a lot of people spread out over rural landscapes to skim their energetic flows, and apply our minds to how we might ease their burden by providing a modicum of more concentrated energy. There are jobs on the farm where they'd certainly want machine power, but the extreme mechanisation of modern agriculture is driven more by profit margins in a competitive fossil-fuelled economy than by any rounded view of what counts as rewarding human work.

Refreshingly Smaje has a focus on labour. Both the work of the people farming, and other people around the world. He wants a society that scraps our alienated labour under capitalism and replaces it with one where people enjoy their work. He also wants others to be properly rewarded:

In a SFF, it's unlikely you'd be able to drive to the supermarket and buy wine from somewhere like South Africa that's furnished by the multitudinous and often poorly paid labours of estate workers, packers, drivers, miners, roughnecks, merchant seamen and so forth. But you might be able to make some wine yourself from the fruits in your garden, and so might all those workers who certainly can't while they're working for you. Overall, if we get it right the energetic deintensification of a SFF may enhance aggregate human welfare - possibly even in the richer countries if we learn to appreciate the virtues of making wine instead of buying it.

Smaje's SFF vision is one of high labour use to create low energy farming that is both sustainable and produces nutritious, high-quality food. Surprisingly despite the focus on high levels of labour his conclusion is for about 15 percent of the labour force in Britain to be employed in agriculture, a figure that would rank it around current participation for countries like Mexico, Tunisia and Ukraine. It would be, he points out,

a profound change from the present, but not an unimaginable one in global perspective. It would also be a source of fulfilling, low-carbon employment in a crisis-wracked society.... With seven million direct food producers, plus home gardeners, the model implies considerable ruralisation and localisation of food production.

I've no great disagreement with societies being more localised - Marx and Engels certainly believed that difference between town and country should be abolished if society was to be more sustainable. But what about technology and industry? Smaje asks if we could "retain some of the benefits of modernity while producing the kind of low-energy, distributed agriculture that characterised historical models." Of course modernity, industrialisation, technology and science has brought many profound improvements for society, including agriculture. But Smaje is arguing that the problem is not these successes but the nature of the society that produces them. Under capitalism technological innovation is not to improve lives and protect ecology, but to maximise profits - whatever the technocrats tell us. That said Smaje thinks things will change profoundly, and his vision of a SFF is definitely not a technological utopia. He says:

I doubt, for example, that a small farm society would have the capacity to produce the computer on which I'm writing these words. For those of us who think the ability of global industrial society to keep churning out such products will be increasingly limited anyway, or who measure human progress by criteria other than the ease of cut-and-past editing; that's not a major worry. But if I had to furnish my livelihood largely from my local ecological base, I'd be sorry to see my chainsaw go. A serious debate on how to secure a realistic industrial base, for a sustainable human ecology and a convivial economy is sorely needed, but it's scarcely happening currently-  mostly because of a the 'progressive' ideologies that police all hints of economic 'backwardness'.

I also would be wary of an future society whose adversion to technology rejected MRI scanners and cancer treatment. But Smaje is right to critique those who see sustainability and social-justice simply arising out of technological innovation. Such eco-modernism should not detain us here. But thinking about how a more socially just society might use have both a small farm base and wider industry is important. But we need to turn the question on its head. What is important is what is produced and why. We don't want a society that can "produce the computer" used to right these words. That society produces technology with short-lifespans, using cheap materials, low wages and with built in obsolescence, because it is driven by profit. A more rational society would produce computers with long life-spans that don't constantly need to be replaced by newer tech. Might we also share such equipment rather than everyone need their own devices?

Which brings me to the biggest question of them all. How do we get there? Firstly, let's be clear what Smaje isn't saying. He does not believe that a SFF can arise out of small movements by enlightened individuals that gradually return to the land and build oases within capitalism. Instead we need, he argues, a different kind of politics, a "small-farm, agrarian populism... that enable[s] people to provision themselves locally and take care of themselves collectively in the challenging circumstances that are now upon was."

I think this is naive. Partly he underestimates the way that the capitalist state exists to protect the status quo, and the way the system will undermine and destroy this approach. In fact, we see it to a certain extent now as communities of small farmers in places like Africa and South America are systematically undermined by agribusiness with the complicity of local governments usually driven by the imperialist interests of the richest economies.

But there is a second problem with Smaje's plan. He rightly argues that we cannot continue with the capitalist mentality that dominates today. In which case we need to transform the ideas in our heads, throw off the "muck of ages" and destroy our old prejudices. This won't come about through a populist movement (however big and however progressive) if it doesn't have mass participation in challenging the institutions of of capitalist society. One of the reasons that socialists argue for revolution is precisely because it is in the process of overturning the old order and creating a new one that people transform themselves. Smaje highlights the usefulness of Karl Marx's ideas for understanding the problems of capitalism. But he rejects Marx's vision of social change - in part because of the countries that pretended to be Marxist while exploiting and oppressing their populations.

But the Marxist vision of social transformation - one where the mass of people take control of the "means of production" and democratically run society by rationally planning production collectively - is one that would offer the framework to remake farming anew. I have no doubt that within such a society we'd see an end to industrial agriculture for all the reasons that Smaje makes. I'm not convinced that in countries like the UK small scale farming will return on the basis of the family productive units which Smaje argues for. But there is no doubt that the future will be more localised, more democratic and more sustainable.

These criticisms aside Chris Smaje's book is important. Because he is an anti-capitalist farmer he has important insights those of us critiquing industrial agriculture and discussing alternatives. While I might disagree with his vision, the important thing is that Chris Smaje is asking the right questions. As he says, there is not enough of this, and his book is an important contribution to these debates.

Posted by Resolute Reader at 12:46 pm