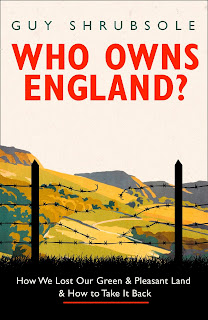 "Who owns England?" is a very good question, and a surprisingly difficult one to answer. That's not to say that various people haven't tried. One of the fascinating things about Guy Shrubsole's book is the discussion of the various historical attempts to understand precisely the question of ownership - from the post-Norman Conquest Domesday book to more recent studies. The roots of contemporary land ownership frequently do stretch all the way back to William the Conqueror. In fact Shrubsole gives a telling quote from one of the numerous Duke of Westminsters who, when asked how "young entrepreneurs" could be successful today answered, presumably not entirely tongue in cheek, "Make sure they have an ancestor who was a very close friend of William the Conqueror".

Today the aristocracy's persistence is traced out in part by land ownership. In 1873 just 4217 peers owned 18 million acres of England, about 50 percent of the country. Never mind the 1 percent, these people were the 0.01 percent. Trying to understand how much of England is owned by the aristocracy today is difficult. Shrubsole concludes that a third of land is owned by the wealthy descendants of William's friends (or those that bought into their class later). Despite some attempts to blunt their wealth, and a few donations of land (often for tax reasons), aristocratic landowners continue to get huge incomes from their ownership, often from land subsidies. It becomes even more obscene when you learn of the vast acreage of land used for grouse, undermining vital biodiversity for a bloodsport enjoyed by a tiny minority. It cannot continue. Shrubsole argues that the aristocracy must become "active stewards, nursing our land back to health... a reformed system of farm subsidies would provide a spur to this, but it will also require the aristocracy's active participation. Will they rise to such a challenge?" I'm doubtful that they can, and tend to think we need a much more radical challenge to their ownership.

However it isn't enough to reduce landownership to the remnants of feudal rule. Who owns land today is the result of enormous changes that have taken place over the centuries linked closely to wider political and social transformations. The land owned by the Church of England or the Crown has been dramatically altered over the years by events like the Reformation and the Civil War. But it's perhaps the development of capitalism which has had the most impact. As I've written elsewhere, this was not simply about ownership but also how land was used and understood. In this, the people who almost always lost out were those who worked the land. As E P Thompson wrote in The Making of the English Working Class about the development of capitalism and its transformation of the rural economy:


In village after village, enclosure destroyed the scratch-as-scratch-can subsistence economy of the poor. The cottager without legal proof of rights was rarely compensated. The cottager who was able to establish his claim was left with a parcel of land inadequate for subsistence and a disproportionate share of the very high enclosure cost. Enclosure, (when all the sophistication are allowed for) was a plain enough case of class robbery, played according to fair rules of property and law laid down by a parliament of property-owners and lawyers.

Shrubsole notes that in 1600 about 30 percent of land was in common. While there was widespread resistance, much of this was lost and never recovered. Today it, and the rest of the country, is owned by the Church, big landowners, massive corporations and various other institutions such as the military. Some of the figures that Shrubsole gives us are extraordinary and give a real insight into wider social issues in the UK.

Private companies own, for instance, about a fifth of the country's land. In doing so, major landowners like supermarkets have transformed our towns and cities in their own image. Often this is for short-term profit, and very rarely is it about providing services. As Shrubsole notes, "Consultants Molior have estimated that between 25 percent and 45 percent of sites with planning permission in London are owned by companies that have never built a house." In other words, ownership has become a method of making money through speculation. It is a situation that cannot continue and Shrubsole is absolutely right to argue:

Remembering that today we are landless because the commons were taken from us doesn't mean we should be looking to return to some sort of rural Arcadia, where we all live by toiling in the fields. A modern movement for English land reform is about solving the housing crisis, rewilding our landscapes and reconnecting ourselves to the food we eat. It's about both rural and urban land and about sharing the wealth that comes from owning land.

By coincidence the day that I write this review is the same day that UK Labour published its proposals for land reform. Guy Shrubsole and others have been part of drafting that, and this book sets out many of those ideas behind those policies. Few who care about the environment and ending social inequality will disagree with proposals to end privatisation of publicly owned land, abolishing "the last vestiges of feudalism in our system of land ownership" and, in particular, ending the madness of subsidies based on land ownership. I am also firmly in agreement that a proper "right to roam" must come as part of giving access back to the wider population. But I am more cynical about whether this legislation can happen with out a major fight.

As I read Who Owns England? I found myself identifying even more than usual with those revolutionaries who advocated the revolutionary seizure of land - its nationalisation - for use by all. The aristocracy has proved adept at fighting to maintain its possessions, and modern corporations are no different in that regard, and I wonder to what extent we'll really be able to reform away the inequalities that Shrubsole so ably describes.

This is a really important book. Many on the left, from Karl Marx onward have sought to understand how capitalism developed and what this meant for the land and its people. But who came to own the land as a result of that process has profound consequences for people today. Guy Shrubsole's book is written with humour and anger and offers a viable alternative. It is an essential read and I highly recommend it.