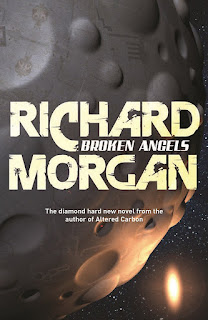 The recent tv series Altered Carbon has introduced Richard Morgan's work to a new generation of science fiction fans. The first season was based on Morgan's first book to feature Takeshi Kovacs, Broken Angels being the second book which bears no relationship to the second season. This however didn't stop the publishers slapping a Netflix logo on the cover of the reissued paperback. The Kovacs trilogy are set in a relatively near future. Humanity had colonised Mars were they found remnants of an ancient civilisation which gave them the key to interstellar travel. The "Martian" artefacts also gave humanity all sorts of other technology, including the ability to store human consciousness in "stacks" that plug into the spinal cord. These mean that people can be transferred between bodies, resurrected after death and beamed across interstellar distances.

But much of Martian life remains an enigma, and some of their technology hasn't been understood, or as some of the characters might cynically point out, been utilised in order for humanity to murder each other in more efficient and spectacular wars. Kovacs, a super soldier with special powers, is on Sanction IV were he is part of a military force putting down a popular uprising. Here he comes into contact with a group of former mercenaries and archaeologists who've been exploring Martian ruins in the hope of finding tech that can yield them big money from the corporations. This time they've struck it big. They've found a Martian spaceship. The first of its kind and now Kovacs is in a race to get to the ship before one or other warring factions, or the corporations behind them get there first.

Brilliantly paced, dark and cynical, there is a lot to Broken Angels. Kovacs is a sort of cross between a Terminator and Philip Marlowe, though he's probably got more of a conscience than either of them. Here he manages a small military team that's slowly dying after the corporation that sponsored them has nuked the local area to clear off any rival claims. To add to the tension there's a rapidly evolving nanobot super weapon that is hunting down Kovacs team and they get to explore an alien spaceship.

I first read this when it came out in the early 2000s. I have to say that it's improved with time. Perhaps I'm even more cynical now about how corporations run roughshod over culture, environment and people in the pursuit of profit. I hadn't remembered much of the plot - so I enjoyed the background argument between different archaeological factions about whether or not the Martians were warlike. I also though Morgan portrays well the way that academics can get sucked into the corporate maw.

The set piece action scenes are well done, Morgan carefully balancing these with the quieter periods as they explore the spaceship or wait for the archaeologists to do their work. The tension is kept high as everyone is slowly dying from radiation. As is now traditional there is the obligatory plot twist which in this case is done very well.

For a science fiction action novel there's a decent amount of cynical anti-capitalism and raging at the corporations and the grey suits standing up for the free market in the face of war and alien spaceships. If you can stand the gore and the pointlessly graphic sex scenes you'll probably enjoy this.

Posted by Resolute Reader at 2:08 pm