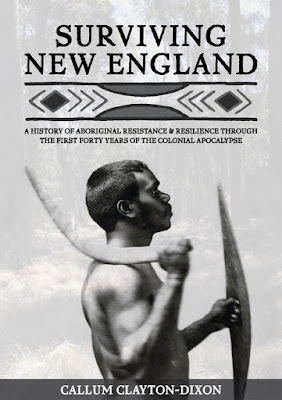 The story of European colonialism in Australia is often told as being essentially about the peaceful arrival of settlers who set about farming the empty and fertile landscape. In these narratives, where the aboriginal people make an appearance, it is usually peripheral. In colonial histories the people who had lived in Australia "since the first sunrise" were uncivilised tribes that made little impact upon the lands around them and could be safely assimilated into European "civilisation". As authors like Bill Gammage and Bruce Pascoe have shown, however, the aboriginal people of Australia were far from uncivilised. The carefully husbanded the land, had extensive and complex societies and were accomplished farmers as well as hunters and gatherers.

But they also resisted. They organised collectively to defend and protect their land from the Europeans who despoiled, murdered, raped and dispossessed the original population. This story of resistance is one that has rarely been told, so Callum Clayton-Dixon's new book Surviving New England is an important account of the neglected history of the "first forty years of the colonial apocalypse" in Australia. Drawing on original archival material and contemporary newspaper accounts Clayton-Dixon has found a plethora of material that tells a story of aboriginal resistance. The material tells a colonial story, but the author shows how it actually tells the story of a collective fightback against colonialism.

Resistance included the stealing of animals, the killing of settlers and their animals and the destruction of European infrastructure. On occasion, from the 1830s to the 1860s this effectively became guerrilla warfare that held back colonial encroachment further into tribal lands.

For Clayton-Dixon, the book is also a deeply personal one. His discovery of the forgotten history of resistance in New England Tableland is in part spurred by his discovery of his own family history - tracing his ancestry back to the aboriginal people of the area. Clayton-Dixon is part of a project to revive the Anaiwan Language and the book is thus a contribution to reasserting the history of the people of the region.

The book is not an easy read. Settler violence against aboriginal people was systematic. It was not committed by a few racist individuals. It was part of a systemic approach to colonial expansion. When contemporary accounts decry the violence of the aboriginal people against settlers they very rarely acknowledge what was happening to the people, their land and their culture. Clayton-Dixon quotes a 1840 report by the Aborigines' Protect Society, which uses "New England as a specific case":

The sheep stations of the settlers are extending, and proportionably diminishing the resources of the natives, thus producing a warfare which reflects most injuriously upon the interests of the first, and threatens the extermination of the last... The land is wholly and unreservedly the settler's- the native is wholly and unreservedly dispossessed... Justice is hard to administer, famine is decreed to one party, and the fruits of spoliation to another... The native attacks the settler's flocks-the settler retaliates, and perhaps a native is killed. The settler had only exercised an acknowledged right when he defended his sheep, thought it were against the hard necessities of the aboriginal disturber of them, and his crime is thus reduced to one of self-defence! This is the state of things brought about by a system of colonisation, which presents the alternative of famine or murder to the natives...

Let us be clear that the strategy of the colonial authorities was the utter destruction of aboriginal people and their culture. Those that weren't murdered would be "assimilated" into European culture. The "seeds of assimilation" as Clayton-Dixon calls them "were sown very early on. Their growth would be accelerated by the sheer intensity and rapidity of the Tableland's colonisation". Aboriginal people were encouraged to work on farms and in industry, often out of necessity, but also making them dependent on Europeans for food, tobacco, clothing and, tragically, alcohol. But this was the end of a process whose beginnings were rooted in violence.

It is "virtually impossible" says the author to get "even a rough estimate of how many Aboriginal people were killed as a result of frontier violence" but it "must have comprised a sizeable proportion of the Tableland's relatively small Aboriginal population". Violence wasn't simply murder. It was also the poisoning of people and the destruction of the natural resources that kept them alive (for instance the use of waterways to wash sheep contaminating water supplies).

Reading the contemporary, murderous accounts, it is inspiring then to read of the resistance. In one account from 1839 the writer inadvertently gives a sense of the fear with which the colonialists felt from the resistance. The aborigines "now think that they can do just as they please with the people at out-stations... I wish you would send up a few pounds of gunpowder and buck shot, and about a dozen good muskets, as we must not be sacrificed by these merciless savages without using every effort to avert it". The same year "settlers complained that Commissioner Macdonald and his men lacked the capacity to effectively check Aboriginal resistance". For years settlers had to carry weapons with them, for fear of the aboriginal people who could "disappear in a moment  amongst the rocks from the whites".

Sadly the resistance was eventually defeated. Disease, superior firepower and the loss of so much land undermined even the most determined fight-back. But as Clayton-Dixon reminds the reader the resistance was important: "Our ancient society was plunged into absolute chaos, and the traumas of this early period remain cared deeply into the land and its people. But because of our ancestors' struggles, their staunch resistance, their unyielding determination to survive, we are still here".

Today Australia's neo-liberal government rules in the name of capital. The Australian people, the land and the environment are trampled over in the interest of profit. Callum Clayton-Dixon's book is an important reminder of a different tradition - one of resistance to the transformation of the land into a space for the creation of profit. Its a tradition that we must remember - in order to make sure that there is justice today for those whose ancestors were murdered, raped and dispossessed so that they can "restore the deeply spiritual and reciprocal relationship with country that our old people maintained since the first sunrise."

Gammage - The Biggest Estate on Earth: How Aborigines Made Australia
Pascoe - Dark Emu: Aboriginal Australia and the Birth of Agriculture
Moorehead - The Fatal Impact
Estes - Our History is the Future
Tully - Crooked Deals and Broken Treaties
Cronon - Changes in the Land
McMillan & Yellowhorn - First Peoples in Canada

Posted by Resolute Reader at 8:43 pm

Email ThisBlogThis!Share to TwitterShare to FacebookShare to Pinterest
Labels: Australia