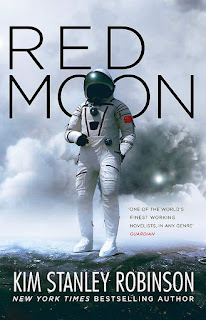 One of the best things about Kim Stanley Robinson's science fiction work is that he is able to project political, economic and social conflict into the future. Often this can be on a massive scale, such as with his Mars Trilogy. He did it well in the much tighter confines of a generation ship in Aurora and, in New York 2140 he tried to show how a post-Global Warming capitalism might work.

Red Moon takes this to, well, the moon. It's a near future where the dominant global economy is China, and America has taken a secondary seat. China's bases on the moon are far bigger than anyone else, but the conflicts among the Chinese leadership back on Earth are starting to make themselves felt far up into space. Fred Fredericks is an engineer who is taking a quantum entaglement communication device to the moon, but when he arrives the person he is handing over it over too - a senior Chinese political figure on the moon - is assassinated. Initially blamed for the killing, FF joins with Chan Qi, an idealistic Chinese revolutionary who needs to escape the moon.

Most of the book follows the two of them as they escape to Earth and go on the run. Qi dynamites a Chinese revolution and at the same time the US economy goes into collapse. A celebrity travel report Ta Shu comes and goes, he is fond of the two runaways, and helps them, but appears to also be at the beck and call of a faction of the Chinese government.

The concept is interesting. But sadly Robinson handles it badly. The plot is an absolute mess. People are constantly on the run, travelling between the Moon and Earth, or different Chinese cities. Stanley uses periods when Chan Qi and Fredericks are in hiding to muse on the different world views, and Ta Shu seems to exist to simply help the characters get from one place to another while using feng shui to explain the world. There is no logic to the revolution - which simply seems to take place when Chan Qi wills it, and its demands are so abstract as to be completely unbelievable. Events in the US simply take place so that Robinson can talk about cryptocurrency as a new way to organise the economy. The random travels of the heroes (they are constantly taking off, running, walking, riding or flying somewhere) become irritating after a time and, the ending.... well the ending doesn't exist.

Fans of KSR will probably have already read it. But unfortunately I felt that this was a dud that was even weaker than New York 2140. You can read my criticisms of that here. This is a far cry from the excellent and tightly plotted Aurora or the innovative and believable Shaman. One to avoid except for die-hard fans of KSR.

Posted by Resolute Reader at 3:46 pm