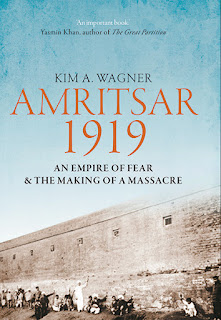 I am posting this review on the centenary of the Amritsar Massacre which took place on April 13 1919. On that day Brigadier-General Reginald Dyer ordered his troops to fire over 1,600 (they counted) bullets at a densely packed, unarmed, crowd killing hundreds and injuring hundreds more.

In Britain the run up to the anniversary has seen debates about what took place and whether or not there should be an apology from the British government. Reading Kim A. Wagner's excellent study of the events before and after the massacre at Jallianwala Bagh I'm struck by how ill-informed much of the discussions have been. For those wanting a clearer understanding of what took place in Amritsar in the Punjab one hundred years ago, there is no better starting place than Wagner's book.

Wagner begins by taking the reader through what is perhaps the most influential account (at least for British audiences) of the massacre - the depiction in Richard Attenborough's film Gandhi. It is a powerful sequence and tells at least a partially accurate account of the day. But Wagner argues that:


Presented without any real context in the movie, the Amritsar Massacre functions simply as a grim vignette to illustrate the power of Gandhi's message of non-violence. The speaker at Jallianwala Bagh is giving voice to the doctrine of Satyafgraha, or soul-force, when he is silenced, quite literally, by British bullets. The massacre is thus depicted as the inevitable result of the clash between Gandhi's righteous struggle and the oppression of colonial rule... Yet the violence unleashed... is entirely embodied by Edward Fox's Dyer: a man seemingly incapable of emotions, who appears as nothing so much as an automaton.

Wagner, in contrast, locates the massacre not as an "inevitable result" of the growth of the independence movement, nor, the consequence of Dyer's mistakes or personality but in the paranoia, fear and racism of the colonial rulers. The story really begins in 1857 when the Great Rebellion, which began as a mass mutiny of colonial troops, nearly destroyed British rule in India. It was a sobering, never to be forgotten, event for the British - India was the key lynch-pin of the British Empire, a vast source of natural resources and the destination was many of the outputs of British Industry. It was also key to a wider network of Imperial relations and losing India could have easily lead to the further unravelling of the Imperial project.

The 1857 rebellion was a bloody event and the British escalated the violence with their collective mass punishment. But the pure fact that it happened left the British terrified. Following World War One the British once again feared rebellion. India had provided vast quantities of troops and resources for the war and many Indian veterans believed that the aftermath would bring reforms and improvements at home. Nothing of the sort took place and growing discontent began to fuel the independence movement of figures like Gandhi. Elsewhere in the world revolution and rebellion where threatening Imperial domination. Most significant was the Russian Revolution which had a major anti-colonial component, but perhaps more important for the people of India were rebellions in Ireland and Egypt which threatened the British.

Its notable that the British in India feared Russian "Bolshevism". Wagner quotes many British people in India who reference the Bolsheviks in 1919 and in the events of April the British certainly imagined shadowy revolutionaries organising violent insurrection. This factor alone put the administration on edge as key figures in Amritsar began to organise the Independence struggle.

But Wagner also emphasises that racism was a central factor in the events that took place. To understand this one has to understand the deeply ingrained racism towards the Indian people by the British. Wagner has many examples, but this particular contemporary account stuck out for me:


Mrs Montgomery told me once she nearly trod upon a krait - one of the most venomous snakes in India. She had been ill at the time, suffering from acute facial neuralgia, 'so that I didn't care if I trod on fifty kraits. I was quite stupid with pain and was going back in the evening to my bungalow, preceded by a servant who was carrying a lamp. Suddenly he stopped and said "Krait, Mem-sahib!" - but I was far to ill to notice what he was saying and went straight on, and the krait was lying right in the middle of the path! Then the servant did a thing absolutely without precedent in India - he touched me! - he put his hand on my shoulder and pulled me back. My shoe came off and I stopped. Of course if he hadn't done that I should undoubtedly have been killed; but I didn't like it all the same, and got rid of him soon after.

What I think existed among the British in India in the post-war period was a racialised paranoia, that meant that people like Dyer (and almost everyone else) saw rebellion everywhere and could only interpret crowds of Indian people as a dangerous, irrational uncontrollable mass. When local leaders were arrested and deported and the local population organised to try and present a traditional petition to the local government on April 10 1919, the British resorted to gunfire to keep the crowds back. This in turn provoked violent rioting which left several British people dead or badly injured and from then on, Dyer's actions were inevitable. He arrives in the city spoiling to teach the masses a lesson and does precisely that. Dyer, it should be noted, was an odious Imperialist, who never wavered in his self-belief after the massacre and was celebrated by the British-Indian establishment, even as he was punished by the British government. In fact, in the immediate aftermath of the massacre, Dyer acted to collectively punish the city in the most brutal fashion, to try and stop further anti-British anger. This led to the infamous crawling order, and:


The very same day Dyer gave his racialised and righteous colonial sermon in church, a striking example of what 'justice in the hand of authority' actually entailed was made... By erecting the whipping post in the street where [Mrs] Sherwood [a victim of the anti-British riots on April 10] had been attacked, Dyer was explicitly drawing on a long tradition of executing criminals, and afterwards gibbeting their bodies on the site of their crime. Not only was the public punishment intended to serve as a deterrent, it also transformed the physical space into a permanent reminder of the power and vengeance of the state.

In the aftermath the British struggled "to find the evidence of the rebellious conspiracy that they were convinced had been the cause of the unrest". Wagner show that they were more successful in keeping quiet the extent of the massacre and word barely trickled out. One senior government official claimed he'd only heard about the scale of the events when it was raised in the British House of Commons in December 1919 by the radical Labour MP J.C. Wedgwood who claimed that "This damns us for all time. Whenever we put forward the humanitarian view, we shall have this tale thrown into our teeth". The shadow of Amritsar would certainly hang over the rest of British colonial history. As Wagner points out, when the British fired on a football match at Croke Park, killing thirteen, it was called the 'Irish Amritsar'. Even that arch-Imperialist Winston Churchill described the events as "monstrous", but in doing so, he began a process of depicting Amritsar as an isolated event, that bucked the trend of benevolent British rule. It is this argument that has dominated the airwaves and newspaper papers around the anniversary, but it is one that is singularly defeated by Kim Wagner's meticulous book.

Wagner's conclusion is very different to the mainstream:


Taking succour in Britain's past glory requires that colonial violence and events such as the Amritsar Massacre be glossed over... A British apology for the Amritsar Massacre in 2019 would, as a result, only ever be for one man's actions, as isolated and unprecedented, and not for the colonial rule, or system, that in Gandhi's words, produced Dyer.

The reality of course is that the British Empire saw many massacres. From Ireland to India, from Africa to the Far-East, British rule was based on divide and rule, systemic racism and the regular use of extreme violence. The very unity between Muslim, Hindu and Sikh that was displayed in Armritsar in the period undermined the whole Imperial project. However weak the British state might be today, it stands on that colonial history, and the only real apology will come as a result of a fundamental challenge to a system that continues to oppress and exploit millions.