Richard Carter - On the Moor 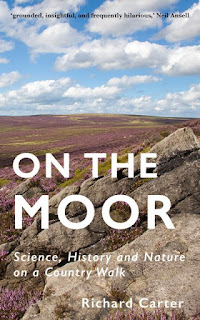 This charming little book follows Richard Carter as he walks and ruminates on The Moor above Hebden Bridge in West Yorkshire. The Moor he tells us is a "large tract of open, uncultivated upland, usually acidic, usually covered in heather." Such descriptions of course are accurate in a scientific sense, but they don't capture what moors are like. Those of us who enjoy walking on them know that they change by the minute - moving from bright sunshine and heat one minute to the dark, frigid, rain swept places seemingly in seconds. They are at first glance devoid of life except for the sheep that graze on the all covering heather, yet walks are frequently disturbed by grouse and a careful observer will see much else of interest.

Carter's book describes walking on The Moore and the things he thinks about when up there. His rambles of the mind often make connections between the place and other, deeper issues. An expert on Charles Darwin he often finds links that take him, and the reader, back to the question of evolution. A break for a cup of tea is an opportunity to discuss James Dewer's invention of the vacuum flask and his failure to patent the technology. A visit to a trig point means a discussion about mapping. These and the inexorable increase of entropy and are part of parcel of Carter's mental meanderings as he walks and gazes.

Carter is an entertaining and well-read author. His work is filled with poetry, literature, history, and wider theoretical discussions and the humour is never forced upon the reader, rather it comes out at opportune moments (there's an delightfully original pun about Wheatears and Chaffinches for instance). On occasion Carter takes up polemical battles - such as the constant relocation of the Moor in Wuthering Heights to the wrong part of Yorkshire by filmmakers and tourist boards. They're the sort of arguments that seem highly important to some, yet immaterial to others. Readers can agree or not, but enjoy Carter's barely repressed rage at the unfairness of it all. Having said that, it would would be churlish of me to make too great a point of my disagreement with him over his championing of nuclear power - though one can appreciate the author's fear that more turbines will destroy his beloved countryside.

Bookshops are filled these days with books about nature. Few of them understand that nature is an interaction between human society and the wider world. Richard Carter's walks and rumination remind us of the connectivity between all things, and they might lead you up a path, onto a moor and a walk to touch a trig point.

Posted by Resolute Reader at 3:43 pm