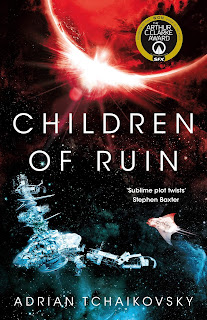 Children of Ruin is the sequel to Adrian Tchaikovsky's smash hit Children of Time and follows on directly from the end of that novel (excluding a tedious journey between stars). In CoT travellers from Earth seeded a planet with DNA to accelerate the development of a safe ecology for their colonisation. Unfortunately it ended up creating a species of intelligent spiders which, when Earth's technological society collapsed evolved on their own. Follow up missions led to war and the mutual collaboration. At the end of the novel they head off into space to investigate a planet from which human radio signals have been received.

Children of Time begins in parallel with the earlier novel telling the similar story of the failed attempt to explore and terraform an Earth like world. This time, arrogance, accident and technological sabotage also led to the creation of a hyper-intelligent community of octopuses, who in the absence of humans are able to utilise our technology to reach into space. Unfortunately, and in a somewhat crude Malthusian metaphor, the octopus civilisation growths too rapidly to escape over-crowding and pollution - leading to war.

Into this mix add a third, utterly alien (as intelligent octopuses and spiders aren't really alien) intelligence that absorbs all other intelligences into its collective mind. This is the complex mix that our human and spider heroes arrive to, and war, mutual incomprehensibility and a giant stalking alien made of stone and bits of shell, threaten to annihilate everyone. While it's all a bit of a rush, and suffers slightly from too many viewpoints, the plot is pulled together rather neatly.

As in the first book Tchaikovsky is able to use his aliens to make somewhat wry comments on our own civilisation. But I did feel that space-faring octopuses were a little over the top. Though it does mean that he get away with sentences that contain phrases such as "solar system of molluscs" entirely without a tongue in cheek. Tchaikovsky ponders a lot more in this book on intelligence, communication and social breakdown (as well as intelligent molluscs), which means the pace is quite different to the first book. I didn't quite enjoy it as much as the CoT, but its a satisfying sequel and fans of the first book should definitely get hold of it.

Tchaikovsky - Children of Ruin
Posted by Resolute Reader at 7:18 am