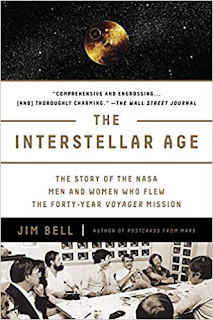 Voyagers One and Two were launched in 1977 and, by a lucky chance of birth, this has meant for much of my life their missions have been a major scientific influence. I was far too young to even know of their encounters with Jupiter and Saturn, though the images they returned were part of the background scientific knowledge for me as I entered my teens and my close interest in astronomy and space sciences. I remember Voyager 2's arrival at Uranus and Neptune in 1986 and 1989, though the latter was overshadowed, in my family, by the massive political upheaval in Eastern Europe taking place that year. The sense of wonder that the two probes brought was enormously influential and, it was only by another lucky chance of timing that the Voyager 2 was able to visit all four of these planets in one trip. In my university studies I was able to draw on some of the Voyager data for a, distinctly, amateur piece of work of the atmospheric physics of gaseous planets.

Jim Bell's history of these missions is "the story of the NASA men and women who flew the forty-year Voyager mission" and it is a profound journey for many reasons. On a personal level it answers some long troublesome questions. For instance, I never understood why the decision was taken by NASA to divert Voyager 1 to Saturn's moon Titan. This meant that the first probe would be unable to visit Uranus and Neptune which always seemed to me to be a major mistake given that Titan was, at least in the Voyager images, distinctly uninteresting. As Bell explains though, scientists knew Titan had an atmosphere and speculation about this, and the possibilities it implied were a point of major discussion in the 1980s. Bell quotes one Voyager scientist as saying that had Voyager 1 failed, the second craft would still have forgone the chance to visit Uranus and Neptune for a glimpse at Titan. However Uranus and Neptune proved far more exciting than expected, but have now only received one visit from a spacecraft. Hindsight, as they say, is wonderful.

More importantly Bell shows just how amazing the missions and the resultant science is. For instance, Voyager actually uses a tape machine to story data and images, before returning them to earth. Few of my tape recorders lasted beyond the 1980s, so to have one, albeit a much more expensive version, survive for the whole of the mission is incredible. Equally impressive is the way that the scientists continually updated the probe's software to compensate for minor damage, fuel limitations and the harsh environments around the gas giants.

Bell has a good chapter on the science behind the famous golden record that sits on both craft. This message to alien civilisations is unlikely ever to be read, but should it be, it has a fascinating store of information designed to maximise information about our civilisation, and instructions on how a relatively scientifically advanced alien society might access the information. I enjoyed the descriptions of which images were selected - in order that they could tell much more about us than simply contained in visual form (eg, an image of a stuck snowmobile tells the aliens that we, acknowledge mistakes, and have a planet that is covered in some form of white stuff). Sadly I doubt these records will ever be found, but they are likely to remain some of the few records of our civilisation long after we have gone. I do, however, consider that Jim Bell's belief that we'll eventually catch up with Voyager and put them in museums a fantasy. As an aside it is notable that despite the scientific endeavour, real world interests influenced the contents of the record. The recording company behind the Beatles was unable to agree copyright exclusions to allow their music to be added to the record - a fantastic example of how capitalism's need to profit from everything shapes the world!

Jim Bell puts across the science of Voyager and our solar system well and in an accessible form. I was inspired to read it partly because I enjoyed Alan Stern & David Grinspoon's book on the New Horizons mission so much. That is a very different book which focuses more on the trials of getting New Horizons off the ground. Voyager had much less of those difficulties and had more planetary encounters. But both missions demonstrate how, even at remarkably low cost (Voyager cost the US taxpayers a few cents each), we can learn a great deal from short flybys. Voyagers One and Two, like New Horizons, have inspired millions of people. It's an impact we should consider more, rather than the penny pinching that such science often gets. For me, reading this felt like I was coming home to events that had shaped me, and my old enthusiasm for the study of the universe returned - and I do hope that Uranus and Neptune are visited someday soon.

Stern & Grinspoon - Chasing New Horizons
Brzezinski - Red Moon Rising: Sputnik and the Rivalries that Ignited the Space Race
Scott & Leonov - Two Sides of the Moon
Clegg - Gravity: Why What Goes Up, Must Come Down
Posted by Resolute Reader at 3:27 pm