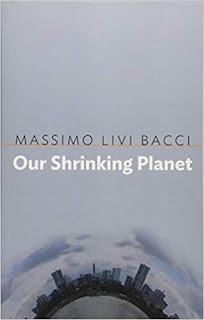 Massimo Livi Bacci is a distinguished professor of demography and this short book is his attempt to explain what population changes mean for humanity. His main argument is that we live on a world where space is shrinking for its inhabitants. The rapid and significant population growth of the last two hundred years has dramatically reduced the amount of resources and space available for each person. However there isn't a simple population story that fits every country, the tendency Bacci argues, is for population growth to follow a rough pattern - accelerating as nations go through economic development and then plateauing at a certain point. Exactly when an where this point is depends on a number of factors - healthcare, wealth, access to contraception and education levels.

Bacci shows how this leads to a contradictory situation whereby some parts of the world are facing a crisis caused by an aging population where 100 year lifespans are a distinct possibility in the near future. Bacci comments:

If ... established norms remain the same, then citizens of the 100-year society will have to dedicate around fifty years to work, pushing back the retirement age - which today (effectively_ stands at a little above 60 - to 75 years of age.


The telling phrase here is "established norms". Because this can only be a problem in a society were  the labour of the vast number of unemployed, or under-employed, is ignored. There's no reason why anyone should have to work longer given that huge numbers of people are desperate for work.

Discussing the international development goals, Bacci notes how despite decrease in rates of poverty in some areas, over-all numbers of people living in poverty has grown. For instance he writes:

In sub-Saharan Africa extreme poverty struck 48 per cent of the population in 2010, as against 56 per cent in 1990. However during those two decades the absolute number of poor people rose by 46 per cent to 125 million, as a result of unrestrained demographic growth. [My emphasis]

A few pages later he asks, "How come a tenfold increase in GDP has not succeeded in containing or reducing the numbers of the needy?" The answer is that problem lies with the nature of the economic system, and how that system sees development. A growth in GDP can be encouraged by allow companies like Monsanto or Cargill to take over a privatised agriculture in a country in sub-Saharan Africa, but that neo-liberal agenda is completed at the cost of driving peasants further into poverty and hunger. Population growth is not the problem - but a system based on the drive for profits.

Similar problems occur when Bacci talks about sustainability - where he simply equates population growth with increased environmental destruction. He isn't so naive as to ignore the point that individuals in developing countries have a smaller environmental footprint than those in the developed world - but he argues that rapid population growth in the developing world, combined with sheer numbers and economic improvement will effectively cancel out the difference. But Bacci fails to note the way capitalism leads directly to environmental destruction. Even the liberal Guardian can point out that 100 companies are responsible for 71% of global emissions. Those companies behave like that not because of population growth in sub-Saharan Africa, but because the logic of the market drives them forward.

The "Malthusian Trap" that Bacci constantly refers to is one that removes people from their economic and social circumstances. While there are planetary boundaries, they are being breached not because population is growing, but because our economic system cannot exist in a sustainable way.

While Bacci's framework is faulty, there is much of use in this book - his facts and figures are presented in a clear and useful way. He takes seriously subjects that some authors ignore - such as the importance of migration and immigration, particularly in the context of an aging population in the developed world. Ultimately he hopes that the demographic situation will lead to a "fourth globalisation" with "positive effects for global relations". But this can only come about in a world of social equity and freedom - and that's not going to happen under capitalism.