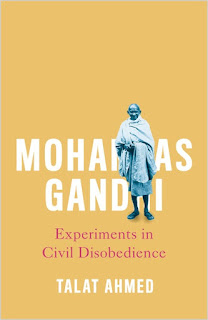 One of the most exciting things about radical politics in the UK in 2019 has been the emergence of mass protest movements against environmental destruction that take their inspiration from historic non-violence, direct action and civil disobedience struggles. Figures like Martin Luther King Jnr and Mohandas Gandhi loom large in discussions about the most effective way to campaign. So I was very pleased to pick up Talat Ahmed's new book that looks at probably the most famous proponent of non-violence, Mohandas Gandhi.

Talat Ahmed traces the development of Gandhi's politics from his experiences as a youth in India, the experiences that shaped him in England while he trained to be a lawyer and then the sharper experiences in South Africa were he encountered systematic racism for the first time. Ahmed shows how Gandhi's politics evolved relatively early into a highly structured religiously inspired vision that placed a highly developed moral code at the heart of everything that Gandhi did and argued for. In particular Gandhi's activism transcended the traditional barriers within Indian society. For instance. he fought hard for the rights of the dalit community, the caste popularly known as untouchables. Gandhi also argued for unity between religious communities, even at time of great unrest and ethnic conflict.

But Ahmed also argues that Gandhi's approach was limited by his approach to wider social conflict.  She writes:


Gandhi abhorred violence, particularly if resorted to by ordinary people, and certainly if it was part of a class struggle against exploitation and oppression - foreign or domestic. This was true in South Africa, Chauri Chaura, Mappiula [Rebellion], the Quit India movement and the naval mutinies. On each occasion, Gandhi lectured ordinary people, the subalterns, for not having understood the principles of his satyagraga strategy, And on each occasion, those who wielded power and had a monopoly on violence to mete out the full power of the state with no regard for passive resistance were absolved somehow of responsibility.

She concludes that "By treating violence and non-violence as abstract moral precepts, Gandhi effectively left the mass of people defenceless in the face of colonial state brutality and violence."

It is clear from Ahmed's book that Gandhi had a horror of struggle escalating out of control, particularly if it began to challenge the basis of bourgeois society. In fact, Gandhi's vision of India after the British had left was very much one of bourgeois capitalist democracy. Gandhi was "a leader precisely because he also possessed the ability to unite the myriad of class forces... in Indian nationalism". Thus those struggles which brought together different religions as part of a mass struggle were often rejected by Gandhi if they went too far. Gandhi himself, under pressure from the growth of the left, had some ambiguity towards capitalism. Ahmed quotes a response from Gandhi to the Indian Communist M.N. Roy's arguments in favour of the Bolsheviks:


I am an uncompromising opponent of violent methods even to serve the noblest of causes... I desire to end capitalism almost if not quite as much as the most advanced socialist or event communist. But our methods differ, our languages differ.

But the problem was not just about method and language. It was also about vision, and ultimately this meant that Gandhi undermined struggles that could have advanced Independence and the struggle against an enormously unjust Indian society. Some examples that Ahmed gives are quite stark - for instance Gandhi calling off struggles when they develop into strikes, or when his supporters riot against policemen who have killed protesters.

Despite Gandhi being forever associated with Indian Independence, Ahmed explains that the British authorities credited other forces for being the final catalyst for change. Clement Attlee, for instance, said that the "principle reason" for the British deciding to leave India was the "erosion of loyalty to the British crown among the Indian army and navy" resulting from the more radical movements. Attlee went on to describe Gandhi's role as "minimal". This is not to say that Gandhi had no significance - indeed he helped create a mass movement against the British, but that Gandhi's strategy, at crucial points, was not enough to drive things through because he had elevated non-violence to the level of a unbreakable religious belief, rather than a tactic.

Talat Ahmed's book is a highly readable, critical, introduction to Gandhi's life and politics. Its importance is underlined by her hope that it will "help activists today grapple with the real life and complex and contested legacy of this enigmatic and contradictory 'non-violent revolutionary'" and to encourage today's activists "to go beyond what Gandhi ever thought possible and engage not only in 'experiments in civil disobedience'" but to build the sort of movements that can fundamentally transform society. Since the bloody legacy of Britain's Partition of India is two countries armed with nuclear weapons, this is a vision that has never been more important.