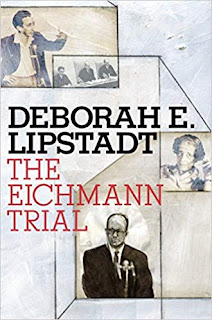 While campaigning in recent elections against the far-right and fascists I've been drawn, once again, to historical events to try and understand the motivations of contemporary Nazis. It was this that meant I picked up Deborah Lipstadt's short study of the trial of Adolf Eichmann in 1961. Discussion of this event has long been overshadowed by Hannah Arendt's account of events, and Lipstadt discusses the trial, as well as Arendt's own account.

Lipstadt says that she was motivated to write about this as part of her own experience in the courtroom as part of the David Irving libel trial. In fact the importance for her was in part the parallel processes. The prosecuting lawyer at Eichmann's trail deliberately used the testimony of multiple Holocaust survivors to create a historical context for the legal action. This was a controversial strategy, but in Lipstadt's conclusion is the "most enduring legacy of what occurred in Jerusalem in 1961".

Readers after a blow by blow account of the court case will need to go elsewhere. Lipstadt focuses instead on the debates around the trail, though that is not to say there is nothing here that demonstrates how Eichmann was very much an unrepentant Nazi. As both the prosecuting evidence and his behaviour during examination and pretrial interrogation shows, he had a very clear understanding of his role in the Holocaust. Eichmann however attempted, but failed, to use the classic Nazi defence of "following orders" and not knowing the consequences of his actions.


Hausner [the prosecutor] had presented an overwhelming body of incriminating evidence to prove that Eichmann's excuses were shams. He demonstrated that Eichmann had a very good memory: he remembered his salary when he trained at Dachau; he recalled the special brandy a colleague had served him; even his own lawyer marvelled that he remembered what he had eaten at a 1943 SS dinner - but not the number of Jews he'd forced into deportation trains.

Given the subject matter the book is at times difficult to read. But some of the most awful material, after the accounts from survivors, is actually the parts where Eichmann's own testimony gives us an insight into the mindset of those who made the Holocaust happen. As here with Eichmann's words at the end of the war in a speech given to his men, summarised by one of the trial judges, "for five years millions of enemies had assailed Germany, and millions of enemies have been killed. And I estimate that war has cost five million Jews."

Eichmann, Lipstadt points out that Eichmann had said he would jump into his grave fulfilled at having been part of this effort.

Discussing contemporary debates about the trial between the Israeli PM Ben-Gurion and critics who questioned Israel's right to try Eichmann she writes:


Ben-Gurion responded by drawing a direct line between the Holocaust and the state  of Israel. Acknowledging that while Israel could not speak in the name of all Jews, he argued that it must speak for the victims of the Holocaust because they believed 'with every fibre of their being that they belonged to a Jewish people.'

Lipstadt cautions that "many of the victims believed no such thing" and continues "For  Ben-Gurion, however, this was utterly immaterial." Thus the history of the Holocaust was closely linked to contemporary politics and the existence of Israel itself. As I noted at the start, the growth of 21st century far-right forces that use anti-Semitism, racism, bigotry and new forms of fascism make understanding this history even more important. The insights into fascism we get from the Eichmann trial are part of the knowledge which helps us fight it today in order to avoid future barbarity and destruction.

Lipstadt - Denying the Holocaust
Evans - Telling Lies about Hitler
Wendling - Alt-Right
Sereny - Albert Speer: His Battle with the Truth
Paxton - The Anatomy of Fascism
Sereny - Into that Darkness
Posted by Resolute Reader at 10:38 am