Andrew Ward - Our Bones Are Scattered: The Cawnpore Massacres & the Indian Mutiny of 1857 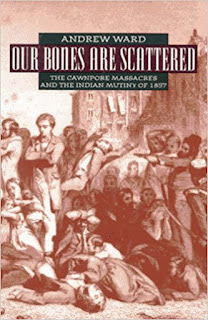 This is an incredible work of history. It describes, in often horrible detail, the Indian Mutiny and specifically the Cawnpore Massacre of the British and the resultant bloody retribution by the East India Company's troops. The author is unapologetic in this, writing in the preface:


I have tried to depict the massacres at Cawnpore unflinchingly because though they were more terrible than anything I hope you can imagine, they were less atrocious than the British public was encouraged to think, and more complicated than either imperialist or nationalist historians have made them out to be. I have tried not to spare the reader the horrors of British retribution because they were more atrocious than the British public was encouraged to think. No one can say how many thousand of Indians - including women and children - died during the suppression... but many times more, certainly, than the Europeans who died at Cawnpore.

Ward locates Cawnpore (including the specific violence of the uprising) and the wider Mutiny in the longer history of British rule in India. He notes the systematic robbery of India's riches, the racism that pervaded everything that Europeans did with regard to the native population, the violence with which the military was used to enforce company interests and the casual belief in white supremacy that meant Europeans simply could not comprehend that the Indian population would revolt against them.

There were a number of issues that meant 1857 brought the native soldiers to the brink of mutiny. Discontent was growing throughout the country, indicated at first by the circulation of chupatty's among the population. This is a fascinating phenomena which clearly has its roots in much older village traditions - headmen would bake these bread and pass them onwards and those who took them, and made others to pass one, where declaring their allegiance. But Ward points out that the colonial administration ignored this, he quotes a British administrator saying that officers "who dared to look gravely on the 'chupatty mystery' were denounced as croakers".

But more direct problem was the question of the new ammunition. Some authors writing on 1857 have argued that the question of the tallow used on new cartridges supplied to the regiments, made from pork and beef, was not as important as historically thought. The tallow was offensive to Hindus and Muslim's alike, and "even the most complacent Calcutta bureaucrat had to concede that the cartridge business was more worrisome". But as Ward points out the "history of the Company's army was replete with such blunders, but at a time of dangerous disaffection in the army's ranks this one proved colossal". It was commonly believed that the British wanted to systematically destroy the Indian population's caste and belief, and rumours regularly circulated that there were factories that manufactured things deliberately to do this.

Ironically, the violence retribution of the British reinforced this idea. As we shall see captured rebels were treated in ways that were designed to be as offensive as possible, reinforcing the beliefs that led to the rebellion in the first place.

Ward's story focuses on events in Cawnpore, a key town in British rule. Here, hundreds of European's, men, women and children, found themselves under siege in a inadequate defensive compound, surrounded by tens of thousands of well armed rebel soldiers. In appalling conditions the mainly British defenders survived weeks of shell-fire and attack, as well as hunger and thirst. Eventually they brokered an agreement with the leader of the rebels, but were betrayed and most of them were killed. The women and children that survived were eventually massacred in the most horrific and brutal way, their dismembered bodies thrown into a well.

I found it difficult to put down Ward's day to day account of the siege and then the massacre, as well as events elsewhere in India. It is brutal, but it's obsessive detail brings to life the reality of the Uprising, and the reasons behind it. The Europeans cannot believe that their world has fallen apart; the Indians are confident they can end British rule, even if they are often unclear on what this means and the true nature of British power. It is extremely clear to the reader that the violence that takes place is a direct result of the nature of Company rule; despite racist European beliefs that such behaviour was inherent to the population they ruled.

The rebellion was eventually overwhelmed by British military power, and weaknesses in the Indian leadership that meant, for instance, failing to take Cawpore quickly and moving forward to other important targets. British retribution, was overwhelming, and appalling. British army columns moved through rebels areas:


Sending the rebels to paradise was not the column's ideas of revenge... so hanging parties devised means of defiling and degrading them before death. Many captives were not permitted to call witnesses or testify in their own defense, some were even gagged... condemned prisoners were often flogged... Soldiers then forced beef down the throats of the Hindu captives, pork down the throats of the Moslems. Prisoners were daubed with animal fat; some Moslems were even sewn into pig skins before hanging. Sweepers were employed to execute Brahmin prisoners, many of whom were first smeared with cow's blood.

From blowing victims from guns, to rape and systematic murder, the violence continued. Despite this, and not unexpectedly, the British public never heard about the revenge. The story of Cawnpore however was used to justify the taking of India into the British Empire and the further rule of India for another century. As Ward concludes:


None of the many wells that the British filled with rebel corpses were memorialised... It was not until April 13 1919, that the well at Cawnpore was displaced in India's moral imagination by another: the well at Jallianwallah Bagh in Amritsar into which Indian men, women, and children jumped to escape the volleys of a party of Gurkhas under the command of British General Dyer... 379 people were killed and another twelve hundred wounded.

It has often been said that victors write history. This is absolutely true of the Indian Mutiny. For years the narrative focused on the appalling violence and betrayal of the rebels, without putting it into context, while the British response was downplayed or ignored. Andrew Ward's detailed, scrupulously researched and extremely well written history rectifies this. I encourage you to read it.