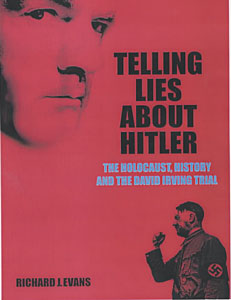 When I reviewed Deborah Lipstadt's book Denying the Holocaust I wrote that it was "a service to all those who believe in historical truth and that history is a science that must be based on evidence, facts and documentation."

One person who didn't think this was the "historian" David Irving. In her book Lipstadt had accused him of being "discredited" and having connections to those who denied the Holocaust, as well as other "neo-fascist" organisations.  Irving was, according to Lipstadt (and quoted in Evan's book), "an ardent admirer of the Nazi leader" and had been accused "of distorting evidence and manipulating documents to serve his own purposes".

As a result of these allegations Irving sued Lipstadt and her publishers, Penguin. Despite their being only references to Irving on six of the pages of her book (which had over 300) Irving demanded the retraction of the publication. The case went to court and among those who were asked to work for the defence was Richard J. Evans, an expert on modern German history and the Nazi period in particular.

There are several parts to this book. Evans documents his own analysis of Irving's writings and public statements. As a result of the disclosure ordered by the High Court, Irving gave over to the defence enormous quantities of his writings, as well as video and audio footage of his speeches. From this Evans and his assistants were able to build up a picture of Irvings' method of research and his wider ideas.

This book is a description of that process, and includes a fairly forensic demolition of Irvings' ideas and books. It also contains a fascinating account of the trial itself, which while centred on Irving suing Penguin, was often portrayed (and interpreted) as a trial of Irving's beliefs. As they discuss the realities of the Holocaust, there are few light hearted moments (though Irving referring to the judge as "Mein Fuhrer" is one of these.

The case was the first were a High Court judge made a ruling on points of historical fact. Evans muses on the advisability of this as well as the problems with following such a trial when enormous quantities of paper and evidence (often in archaic German script) made up the evidence. As the Guardian reported, "The judge found Ms Lipstadt was justified in saying that Irving had falsified history to exonerate Hitler, driven by anti-semitism and his own pro-Nazi views."

In conclusion Evans also quotes the Guardian "even a casual reader of the case reports could quickly see how painstaking genuine historical scholarship is; it builds detail upon detail, avoiding casual inference and thin deduction." Evans then continues that the trial "demonstrated triumphantly the ability of historical scholarship to reached reasoned conclusions about the Nazi extermination of the Jews on the basis of a careful examination of the written evidence".

Lipstadt - Denying the Holocaust
Posted by Resolute Reader at 9:05 pm