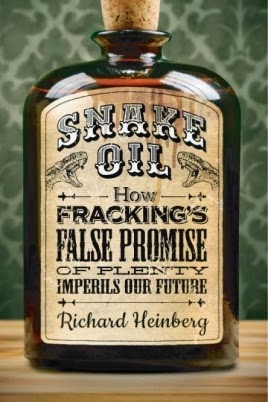 Fracking is a relatively recent arrival in the UK. The few sites that have seen drilling have provoked large and diverse protest movements and camps. Activists have built up a powerful set of arguments against fracking. We oppose it for many reasons - the irrationality of burning further fossil fuels, for the polluting effect on local air and water, for the increase in traffic and for the way that fracking companies are allowed to run roughshod over local planning laws and the interests of the community.

Snake Oil is the first book I have read that puts the arguments against fracking into a larger context. The author is an energy expert who has written wildly on the problems of the oil industry, particularly the question of Peak Oil. As the title suggests, he argues that fracking is a "false promise" from the oil companies that want to continue business as usual, in the face of a dwindling supply of mainstream oil reserves. The US government in particular has based its economic future on over-exaggerated promises from Snake Oil salesmen.As Heinberg says, "the Obama administration finds temporarily rising oil and gas production figures so enthralling that it is willing to ignore long-term costs to water and air quality, and to the health of humans, livestock and wildlife."


Heinberg argues this promise is likely to collapse soon, causing major problems for the economy and the future of energy. A short, new preface, gives the book context for UK readers and, tellingly, Heinberg dedicates the book to activists fighting for a more rational energy future.

The early sections of the book deal with Peak Oil. In the US arguments that oil and gas production were reaching a plateau and would fall off have been averted by bringing online large sources of shale gas. But Heinberg argues this is based on over optimistic predictions and a misunderstanding of the nature of the problem. Fossil fuel supplies, of shale gas, oil and coal and extremely large. However, most of these sources are so difficult to access that they are not economically viable. Indeed with some of them, the energy required to utilise them would be fare more than could be produced by burning the finished product. As Heinberg emphasises, "the peak oil discussion is about rate of supply, not of size of resoureces or even reserves." Locating new supplies has also declined (it peaked in the early 1960s), in "recent years the oil industry has found (on average) one barrel of new oil for every four or five consumed".

In other words what is happening, is that we are increasingly reliant on harder to access, refine or process sources of fuel. Naturally companies always use the "sweet spots" first - the places were it is easiest to build wells or drill. Predictions for the amount of gas that can be reached or the value of the fuel obtained are then extrapolated from these best points, leading to immense speculation on Wall Street and false promises. Indeed Shale Gas (and other extreme energy sources) are only viable because the price of oil is so high and expected to rise. Leading to the obscene situation where companies are building "shale gas wells that cost more to drill than their gas is worth at current prices".

Heinberg concludes that "taking into account decline rates, potential drilling locations, and the variability of regions within resource plays [gas fields], the industry's claims for how much oil and gas can be extracted, at what rate, and how profitably, are widely overblown."

Activists against Shale Gas will be aware of a number of arguments from the fracking companies seeking to sweeten the pill of drilling in local communities. Heinberg takes up a number of these - he points out that promises of new jobs rarely go to locals - they usually go to specialists who move to an area for a few years, before moving on. Predictions of jobs to be created in the US in fracking areas, frequently include strippers and prostitutes that thrive amongst the boom areas. Local jobs tend to be service jobs that last a few years.

Heinberg also demonstrates how polluting fracking is. For instance, a National Oceanic and Atmospheric Administration report said that "4% of the methane gas being produced in the Wattenberg field in Colorado was leaking to the atmosphere." Another study by the same team put the figure at 9% for a field in Utah. Methane is a significantly dangerous greenhouse gas, and the one responsible for the burning tap water shown in many You Tube videos.

This short book is thus an extremely important and very readable book for anti-fracking activists. While it concentrates on the US experience, it is possible to utilise many of the facts and figures for to argue against fracking in the UK. It also raises a number of other questions.

Heinberg argues strongly that we need a switch to renewable energy showing it is technologically possible. Unfortunately, as Heinberg knows, governments around the world as less than enthusiastic for the transition. While part of the problem is, as Heinberg says, that some have been seduced by the idea of large quantities of shale gas as a transition fuel to a low carbon future, the biggest problem is a system that is structured around a fossil fuel economy and the interests of the oil companies.

"the US is failing to plan for a future in which hydrocarbons are more scarce and expensive; failing to invest sufficiently in renewable sources of energy, and in low-energy infrastructure such as electric light rail; and failing generally to do what every nation must in order to survive in a century of rapidly destabilising climate - which is to reduce dependency on fossil fuels as quickly as possible."

Heinberg's book tells us exactly why shale gas is a false promise and will help destroy the planet, rather than save it. The information in it will allow activists to build stronger and better informed anti-fracking campaigns. It will also help us develop a wider critique of energy production and use under capitalism and struggle for an alternative.

Nikiforuk - Tar Sands: Dirty Oil and the Future of a Continent
Rogers - Green Gone Wrong
Marriott & Minio-Paluello - The Oil Road
Klare - Blood and Oil: How America's Thirst for Oil is Killing Us.
Posted by Resolute Reader at 5:35 pm