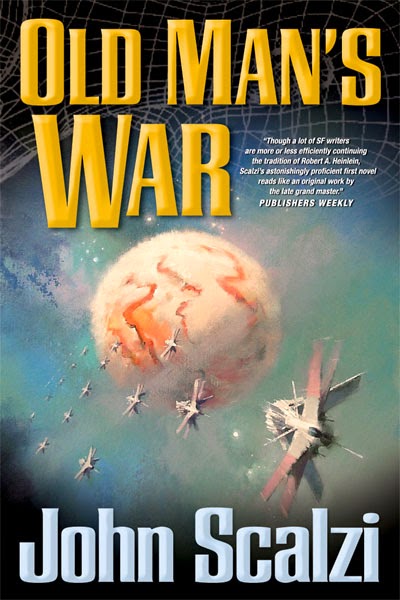 Heavily influenced by Robert Heinlein's Starship Troopers and Joe Haldeman's The Forever War, as well as Vietnam films like Full Metal Jacket, John Scalzi has brought a new twist to the story of humans joining a galactic defence force. Scalzi writes very well. The action scenes work brilliantly, the dialogue is amusing and if the plot twists are a little unbelievable, hell it's science fiction.

The problem is the politics. Scalzi clearly is trying to distance himself from Heinlein's cruder militaristic bent. But he cannot get rid of it entirely. Here once again is a galaxy so packed with threats that human civilians cannot hope to survive without a massive military. A military that is effectively superhuman and without any form of accountability to wider human society. Indeed, society is kept in blissful ignorance of what's going on outside their solar systems.

The Colonial Defence Force isn't a defence force - its a militaristic colonial expansion programme. Apparently, in the future, humanity doesn't use its intelligence and scientific ability to avoid untrammeled expansion. Those that question the status quo meet untimely ends and the reader is told in no uncertain terms that there is no alternative to mindless military genocide. And it is genocide. There's a particularly clever example of the defence force literally crushing an entire alien population. As for the civilians? The CDF is also adept and strike breaking, helping space-scabs cross space picket lines and murdering space strikers.

Scalzi has written a clever piece here, but it is a flawed and shallow vision. Maybe he's trying to poke fun at Heinlein's awful right-wing vision of a spacefaring humanity to stupid to protect itself without a military caste. But Scalzi apes his hero too much and becomes little more than a imitator. Very disappointed after enjoying Redshirts so much.