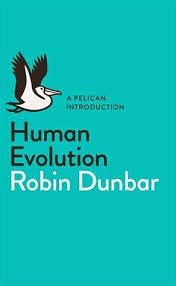 Early in this book, Robin Dunbar explains the importance of an introductory work on human evolution. He writes,

"we share with the other great apes a long history, a largely common genetic heritage, a similar physiology, advanced cognitive abilities that permit cultural learning and exchange, and a gathering and hunting way of life. And yet we are not just great apes.... The substantive difference lies in our cognition, and what we can do inside our minds."

Later he concludes, with a central theme of the book, that "what underpins all this cultural activity is, of course, our big brains, and this might ultimately be said to be what distinguishes us from the other great apes."

Dunbar's ambition is excellent. To demonstrate how we have arisen from the animal kingdom, yet are also different, is very important as much of what else we can say about human society depends upon this. To do so in an introductory volume accessible to the interested reader is laudable. Yet I fear this book fails to achieve what it aims to, because the authors framework boils down to evolutionary psychology that fails to develop beyond a mechanical approach to biology.

Take one of the central themes of the book. The "social brain". Robin Dunbar explains what he means by this and some of the consequences.

"The social brain relationship manifests itself in primates as a cognitive limit on social group size and brain size. The social brain hypothesis has been given a significant boost by a recent spate of neuroimaging studies demonstrating that the absolute volume of key brain regions correlates with social network at the individual level (including the number of Facebook friends), both in humans and in monkeys."

Examining the data gives Dunbar a "predicted group size" of around 150 people. He illustrates the accuracy of this figure with various figures - neolithic villages had 150-200 people in them, the average village in the Doomesday Book had a population of 150, Christmas card distribution lists are on average 154, and Gore-Tex factory unit sizes are 150. The smallest unit in modern armies, that can function on its own, we are told, is the company with an average size of 150.

The problem is, that these cultural restricted, and somewhat arbitrary figures (154 Christmas cards??) seem extremely unlikely to be derived from brain size. Hunter-gatherer band size and medieval village populations had for instance, much more to do with availability of food. Factory unit sizes are determined by potential profits, markets and availability of labour, rather than the ability of humans to network through their social brains.

The bottom line, Dunbar says, is that that "the social brain hypothesis provides us with a precise equation for predicting social group size from brain size." Unfortunately, in doing so, it appears to me to ignore almost everything else about our interactions as a species with each other, and the natural world; in particular the changing economic relations we construct to organise our way of life.

This is not to suggest that Dunbar's book is entirely without merit. But his approach is stunningly reductionist. For instance, he concentrates very much on "time budgets" when studying and comparing different species. This is an approach that basically means breaking down an animal's (or human) time into parts and working out how much time must be spent eating, sourcing food, grooming and sleeping to achieve all the necessary rest, energy and social interaction to make the species hold together.

Now there are a lot of ifs, buts and hypothesises here. But the bigger problem is that extrapolating so much from the animal kingdom and making decisions about human lives can only take you so far. We are left with a mechanical interpretation of modern humans that doesn't do what Dunbar sets out to do, i.e. understand why we are more than apes.

Secondly, some of this reads like a clever, "just so" story. With humans evolving solutions to solve a time-budget issue, but who cannot possibly have had the time-budget issue and survived. Evolution doesn't proceed because of a problem that will occur in the future, but as a response to changing circumstances in the here and now. So Neanderthals can't have learnt to cook to solve a time budget crisis, but must have found that learning to cook, changed other aspects of their life. Dunbar makes this mistake explicit, when he writes about how the gestation of human children changed.

"The compromise solution that our ancestors came up with was to reduce the length of gestation to the absolute minimum needed to produce a baby that could just survive on its own."


Biologically this is what happened. But the idea that this was a "compromise solution" implies that it was a choice made by humans (or at least females). This is just bad science.

In his final analysis, Robin Dunbar concludes that

"The real story of how we came to be who we are beings with the appearance of the first Homo species... From there on in, it was a constant battle with time budgets under pressure from environmental factors that were selecting for ever larger community sizes..."

The problem with this is that it narrows humans down to simple victims of circumstance. Except, earlier in the book, Dunbar has shown how even the earliest humans developed tools to change and alter their environment. Indeed, to me, this is the missing link in Dunbar's analysis. We aren't simply products of our biology interacting with our environment, but we have, through our labour, altered our environment to improve our ability to survive. Thus we have shaped the world around us, and thus helped to shape our own biology, through learning to hunt, to cook, to cut trees, to dig holes and eventually to grow food and build societies were not everyone has to spend their whole lives producing food. Thus Dunbar's book, for all its strengths in explaining our convoluted history, cannot actually explain why we are what we are, and answer his own question. It is a great disappointment.

Rose - The 21st Century Brain
Finlayson - The Humans Who Went Extinct
Stringer - The Origin of Our Species
Posted by Resolute Reader at 10:06 pm

Thank you for succinctly summing-up the arguments, thus saving me from ever having to read the book. The author seems to have started with a conclusion and worked his way backwards.

Unfortunately I think this review completely misses the point of the book and the arguments that Dunbar is making. I agree that at points some of the evidence appears to be a little too circumstantial, but the book is effectively a summary of a lot of research and the core scientific material is (hopefully) more rigorous.

"Hunter-gatherer band size and medieval village populations had for instance, much more to do with availability of food."

Examples like this abound in the book. Dunbar's 'social brain' prediction is an upper limit to the 'group size' of primates. Moreover, he clearly states that 'group size' is a complicated concept and spends several pages discussing it, as well as making several caveats about its usefulness.

"Factory unit sizes are determined by potential profits, markets and availability of labour, rather than the ability of humans to network through their social brains."

True, but this is an explanation that takes place within the framework of the upper limits placed by the 'social brain hypothesis'. The point is that a certain level of cognitive ability needs to be in place for certain group sizes, whatever this may mean in practice.

"We are left with a mechanical interpretation of modern humans that doesn't do what Dunbar sets out to do, i.e. understand why we are more than apes."

It is true that Dunbar explains a lot in terms of the seemingly mechanical and reductionist approach of time budgets. However, this is clearly just another tool in the tool box for predicting when certain evolutionary steps took place. I do not believe that it is supposed to be anything more than that - a simple yet powerful model that allows him to predict whether or not a certain lifestyle is viable (i.e. the species will not die out) at a given point in evolutionary history. Perhaps it is fair to criticise him for the style in which the book is written, in that it places too much emphasis on the time budgets and not enough emphasis on the conclusions about when certain characteristics evolved, for which time budgets are merely one tool in hypothesising.

"But the idea that this was a "compromise solution" implies that it was a choice made by humans (or at least females). This is just bad science."

Again, I think this is more of a criticism of the way in which the book is written rather than the underlying science. Many authors write about evolution in these terms, assuming that the reader implicitly understands that this is merely a figure of speech that makes the prose easier to read. Richard Dawkins makes this clear in several of his books. Dunbar does not, but that is probably because this book is aimed at the reader who already has a solid grasp of the basics of how evolution works. The idea that Dunbar believes that 'our ancestors' made a considered choice to change their life is absurd. He most certainly understands, rather, that it was gradual changes that led eventually led to this 'solution', each of which was 'preferred' due to selection pressures, and he assumes that the reader understands this too.

"We aren't simply products of our biology interacting with our environment, but we have, through our labour, altered our environment to improve our ability to survive... Thus Dunbar's book, for all its strengths in explaining our convoluted history, cannot actually explain why we are what we are, and answer his own question. It is a great disappointment."

The first sentence is true and yet does not negate any of the arguments made by Dunbar. We are certainly not even the only animals to alter our environment, as Dunbar makes clear.

It seems that with the second sentence you are hoping for something more than this book than what it actually sets out to do - set out the history of our evolution and discuss what makes us different from other animals, both of which it does. I am even sure exactly what you mean by 'explain why we are what we are'.

In conclusion, Dunbar's book is not a complete discussion of human evolution, and for a fuller understanding the reader should certainly read further around the subject. Rather, it is an explanation of a new approach to the subject which has allowed him and others to make previously out-of-reach suggestions and hypotheses. It is not perfect, but I do not believe any of your arguments against it hold much traction. His approach does not in any way render his arguments invalid, as you seem to suggest, but just requires that the reader explores the topic further, and from the many other angles that it can be tackled.