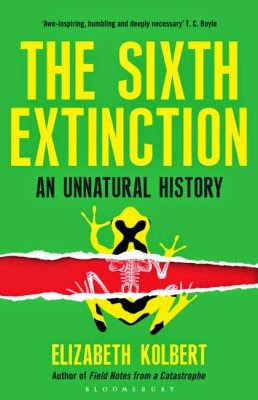 Elizabeth Kolbert begins her book on the current biodiversity crisis with a damning summary of the situation. After visiting Panama and meeting locals and scientists who report an enormous crash in the number of frogs in the rainforests, she writes

"Today, amphibians enjoy the dubious distinction of being the world's most endangered class of animals; it's been calculated that the group's extinction rate could be as much as forty-five thousand times higher than the background rate. But extinction rates among many other groups are approaching amphibian levels. Its is estimated that one-third of all reef-building corals, a third of all fresh-water mollusks, a third of sharks and rays, a quarter of all mammals, a fifth of all reptiles and a sixth of all birds are headed toward oblivion."

Kolbert explores the nature of extinction, from the sudden impact that obliterated the dinosaurs and almost all life on the planet, to the more gradual dying off that takes place as environments change. The book looks at how the historical "great" extinctions, including the dinosaurs and the enormous transformations of the oceans that saw the wiping out of animals like the ammonites. But this serves merely as the backdrop to explain just how different the mass extinctions we face are today.

The scale of the biodiversity crisis lies rooted in the expansion of human society across the planet. Many of the changes, like the dying off of the amphibians in Panama, have a single reason (in that case a particular fungus), others are linked to the environmental changes that are taking place - particularly climate change, which is warming the world, changing weather patterns and making the seas more acidic. All of these, even the fungus, have a common theme - it is human society that is making them worse.

Take the question of "invasive species" - animals or plants that are alien to a particular ecology, and when introduced can thrive at the expense of localised flora and fauna. Global trade networks have facilitated the spread of animals, large and small. Such that "every year more non-indigenous species of mammals,birds, amphibians, turtles, lizards and snakes are brought into the US than the country has native species of these groups." The fungus that destroys enormous numbers of frogs in Panama is a much smaller example of this.

A bigger problem is the way that humans encourage the creation of island ecologies. The splitting up of the rainforest is an example of this. Species may not cross a patch of open land, such as a road or a cleared area, so their numbers may not be able to spread to escape a changing environment, or find enough mates to procreate. This effect is well known in nature - isolated groups of species tend to die out over time as numbers dwindle. Human society makes it worse.

Along the way, as Kolbert explores the various examples and causes of extinction, Kolbert meets many scientists and activists who are trying to save individual species or groups of them. She meets brilliant individuals desperately trying to understand what is changing in the world and why. Frequently they have very bleak outlooks. That people want to avoid animals and plants going extinct demonstrates how much people care about the planet's environment. The problem is though, a political and economic system that puts the interest of multinational corporations before the planet and the myriad of species that live on it. Until we start to challenge the unsustainable nature of capitalism, we are doomed to see many more species die out. Kolbert's book is a brilliant, but tragic introduction to the scale of the problem we have.