Horatio Clare - Down to the Sea in Ships 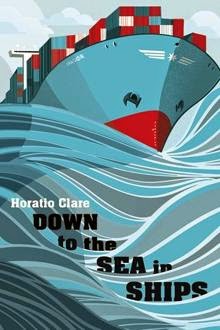 This lovely little book details the authors two voyages with the crews of two ships, the Gerd Maersk and tje Maersk Pembroke. The first a state of the art super container ship which Horatio Clare joins in Felixstowe, leaves temporally in the Middle East, and rejoins in South East Asia. The second is an older cargo ship, crossing the Atlantic. Both voyages have similarities, but both are very different experiences. From mid-Atlantic storms to the voyage along the Suez Canal.

Along the way Clare bonds closely with the crews. Joining the ships with the permission of the shipowners, but with freedom to write what he wants, he tells the stories of low pay, long voyages and hopes and fears of the seamen. Their complaints (lack of beer on board) and their stories of disasters and duty free shopping are often funny, but sometimes tragic. You get a real sense of a body of seamen, united by shared experiences. But there are darker sides too. Many who make up international shipping crews are Filipino, suffering lower pay than their white colleagues, they often suffer racism and discrimination rarely becoming officers despite years of loyal, low paid work.

There are even darker tales. Clare tells of stowaways cast adrift, of ships that cuts back on training and equipment to maximise profits. He quotes from reports by UK inspectors on the state of ships, that "could have been written fifty or a hundred years ago":

"The crew accommodation was no longer provided with heating; there were insufficient fruit and vegetables on board... There were insufficient life rafts, the sanitary water system was inoperative and there was no fresh-running water. There were no nautical publications and charts were incomplete for the operational area.. The ship was dangerously unsafe as the engine room bilge wells were full of thick black oil... There was insufficient diesel fuel on board for the voyage..."

However bad it is on some ships, Clare's two voyages demonstrate that not all ships are like this. The camaraderie and comradeship, the way the crew work together in some of the toughest and most dangerous situations is very powerful. It is people like this, earning very very little, that move the goods around the world that keep consumers happy. This book should make everyone remember the blood, sweat, tears, and suffering behind the stuff on the shelves.
Posted by Resolute Reader at 3:43 pm