Leon Trotsky - The History of the Russian Revolution 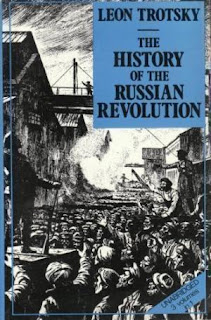 I chose to re-read Leon Trotsky's The History of the Russian Revolution over November 2017, exactly one hundred years since the all to brief triumph of the Revolution it discusses. Doing so allowed me to reflect on what that Revolution meant, but also how it has been portrayed, interpreted and understood since.

You don't have to read much of Trotsky's book to see how inadequate the coverage of 1917 has been for the centenary. Trotsky's work is a masterpiece of literature, powerful writing combined with a Marxist clarity that gives an unrivalled historical perspective on the events of the Revolutionary year. As a result The History of the Russian Revolution reads like a novel, in fact its very structure feels at times like a fictional account as the author builds tension towards the climatic seizure of power. The book teams with passages that are quotable, but take this section describing the situation as power decisively shifts away from the "compromisers" and towards the Bolsheviks:


Kerensky... was confidently calculating that in case of danger the Central Executive Committee, in spite of all family misunderstandings, would come to his aid in time. It was so in July and in August. Why should it not continue so? But now it is no longer July and no longer August. It is October. Cold and raw Baltic winds from the direction of Kronstadt are blowing through the squares and along the quays of Petrograd.

Junkers in long coats to their heels are patrolling the streets, drowning their anxiety in songs of triumph. The mounted police are riding up and down, prancing, their revolvers in brand-new holsters. No. The power still looks imposing enough! Or is this perhaps an optical illusion? At a corner of the Nevsky, John Reed, an American with naïve and intelligent eyes in his head, buys a brochure of Lenin’s entitled 'Will the Bolsheviks Be Able To Hold the State Power?' paying for it with one of those postage stamps which are now circulating in place of money.

These two paragraphs demonstrate a couple of things about Trotsky's book. First is the way he manages to get across a real sense of the balance of class forces and how they shift and change throughout 1917. Secondly is the way that Trotsky builds tension and drama - the raw winds blowing from the base of the revolutionary sailors at Kronstadt towards Petrograd aren't just about the weather, and secondly Trotsky's ability to build narrative tension as the crisis deepens in Russia.

But it is Trotsky's historical account that is most important. Despite portraying himself in the third person (a writer's master stroke in my opinion) Trotsky eschews any attempt at an independent historical narrative - this is polemic. But it is polemic for two reasons - the first, and most obvious is that it is designed to arm and give confidence to socialists who are trying to build revolutionary organisation and look to the Russian Revolution for inspiration.

Closely linked to this is Trotsky's battle with Stalin. The History of the Russian Revolution was written towards the end of the 1920s and finished in 1930 and comes immediately after Trotsky's defeat by Stalin and his exile. Thus the book has to be understood as reassertion of Trotsky's principle political arguments against Stalin, in particular Trotsky's argument that "socialism in one country" was impossible. Thus some of the most important sections of the book do not actually deal with 1917 but with the historical context of Russia's economic development to the revolutionary years.

Trotsky explicitly sets this out in several appendices which he hopes that a tenth or hundredth of his readers will read in addition to the main account. Trotsky was setting out on his new task of finding handfuls of supporters who could rebuild the international socialist movement. His focus on the role of the Bolsheviks' here and how they related to the mass movements on the streets is a key part of the story and his polemic.

But the majority of readers will, as Trotsky acknowledged, read this book for its unrivalled historical account of 1917. It is a long and detailed book, which seems to have penetrating insights on every page. But it's length shouldn't intimidate - Trotsky's writing is clear, passionate and at times very funny. Take his hilarious thumb nail portraits of the Russian generals who would go on to form the basis of the counter-revolutionary White Terror:


An army is always a copy of the society it serves – with this difference, that it gives social relations a concentrated character, carrying both their positive and negative features to an extreme. It is no accident that the war did not create one single distinguished military name in Russia. The high command was sufficiently characterised by one of its own members: “Much adventurism, much ignorance, much egotism, intrigue, careerism, greed, mediocrity and lack of foresight” – writes General Zalessky – “and very little knowledge, talent or desire to risk life, or even comfort and health.” Nikolai Nikolaievich, the first commander-in-chief, was distinguished only by his high stature and august rudeness. General Alexeiev, a grey mediocrity, the oldest military clerk of the army, won out through mere perseverance. Kornilov was a bold young commander whom even his admirers regarded as a bit simple; Kerensky’s War Minister, Verkhovsky, later described him as the lion heart with the brain of a sheep. Brussilov and Admiral Kolchak a little excelled the others in culture, if you will, but in nothing else. Denikin was not without character, but for the rest, a perfectly ordinary army general who had read five or six books. And after these came the Yudeniches, the Dragomirovs the Lukomskies, speaking French or not speaking it, drinking moderately or drinking hard, but amounting to absolutely nothing. First time readers might be surprised that some of the most fascinating chapters are those that deal not with the revolution but with the ruling class that was overthrown - Trotsky showing why their regime was ripe for collapse.

But ultimately this is a description of a year of revolutionary upheaval that involved millions of people in action. Trotsky never loses sight of that key fact - that the revolution was made by ordinary men and women, and he celebrates this fact at every stage. In fact by focusing on the ideas, slogans and demands of the factories and streets Trotsky is able to get to the heart of why the Bolsheviks were able to lead the working class to victory. This is a celebration of mass democracy, participation and revolutionary dynamism.

No other author does it as well as Trotsky's history and no one trying to understand 1917 can avoid reading this book. I first read this as a young socialist some 25 years ago. Re-reading it again a quarter of a century later I was struck by how fresh it felt, but also, how much of it I had retained and learnt from. Perhaps that's Trotsky's true legacy.

In the course of 2017 I've read or re-read a number of books related to the Revolutionary Year of 1917. Those reviews can be found here.

Trotsky - On Britain
Trotsky - Lessons of October
Trotsky - 1905
Trotsky - An Appeal to the Toiling, Oppressed and Exhausted Peoples of Europe
Cliff - Trotsky: Towards October
Posted by Resolute Reader at 9:55 pm

At the beginning of this year I had all sorts of fine intentions to read Russian literature this year, esp any set in & around the revolution. So far I've read one!
You've done far far better.
Adding this one to my wishlist, not sure how I missed reading it 30 yrs ago when I was studying.....