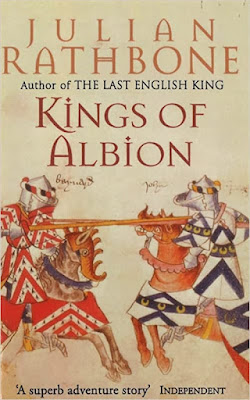 It's the fifteenth century. A group of princes and their followers travel to a country far from civilisation, in a quest for riches, power and to rescue a captured friend. They travel to this distant land through foreign places teeming with strange, irrational and heretical ways. When they arrive they find the country in the midst of bloody civil war, with kings and princes whose behaviour and barbaric customs, food and music sicken the very souls of the travellers.

We are of course travelling from the civilised country of Vijayanagara in southern India, whose wealth, power and cultural achievements are legendary, and visiting the barbaric backwater of England. Our travels tell their tale through many mediums, gathered together by the Mah-Lo. His main informant is the trader Ali ben Quatar Mayeen who guided the princes into this hell hole via the Middle East and Europe.

Julian Rathbone's novels are noted for their humour and their not occasional anachronisms. He peppers the text with in jokes and cultural references, our travellers learn about football, learned characters allude to insights offered by Darwin and Newton, and above all we find out the truth between some key historical moments during the War of the Roses. But Rathbone's novel, despite being fully tongue in cheek, are more than just entertainment. He makes a several serious points about how the West always saw the East as backward, while the opposite was clearly true. His characters, particularly Ali and his English clerical friend Peter, discuss deep philosophical ideas, giving a reader a sense of the great ideological crises that would soon sweep Europe - though these feel (and are) out of time for the period.

I was particularly taken by the character of Uma, a follower of the Indian god Kali, who travels with the band, going on her own adventures with a hedonistic approach to life and death. As she seduces Eddie Plantangant, she drags our tourists deep into the intrigues of the Wars of the Roses, but in her own explorations of England learns much more about how the ordinary people of the country live than her more high ranking followers.

Rathbone is clearly trying to reverse a Rider Haggard type travelogue (consider the name of his main character, for instance). The book works more as an intriguing, comic, account of travel rather than an adventure. Though it kept me gripped until the end.

Posted by Resolute Reader at 10:03 am