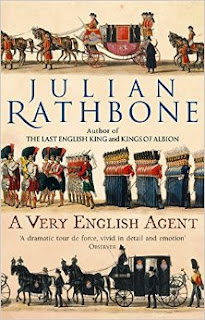 Throughout much of the 19th century the British government was fearful of revolution. In every dark corner, every working men's pub and every rural village they imagined agitators plotting the violent over-throw of their order. There was, of course, some substance to these fears. There were plenty of people who had reason to despise those at the top of society. Poverty, unemployment and underemployment, hunger and fear of the future were the reality for most working people. Which is why mass movements arose, and why localised rebellions did occur. People burnt hayricks and threshing machines to defend their jobs; attended protest meetings to demand the right to vote and have some say in politics and some, went further and plotted revolution.

The British government had a extensive network of agents. These fed back news to London, and often helped inflame the fears of the ruling classes. But these spies might also have had darker, nastier roles than simply gathering information. We only have to look at recent undercover activity by British police to know that this was likely true back in the 1800s.

Julian Rathbone's romp though the underbelly of British 19th century social history focuses on the life of one of these agents. Charlie Boylan arrested attempting to break into Parliament with a loaded gun claims that he is owed a pension and some money for services rendered to the Crown.  A hired thug, assassin and agent provocateur he helped undermine and finish off rebellious movements and uprising; and in this version of history, he did for some of history's greatest revolutionary minds. The problem is that Boylan's role was never really recorded, so know one is quite sure whether to believe him. And Boylan's role in undermining social movements and being a hired gun also meant he had some insights into the darker side of the lives of the rich and famous.

Its an enjoyable book, though Rathbone works too hard to entertain the reader with knowing puns and historical jokes. Saying that though, Rathbone knew his stuff and there is a surprising amount of forgotten history here, with the occasional cynical comment on the fate of revolution and rebellion. Lefty readers who know their history might raise the odd wry smile and have to ignore the fact that they are reading a book whose central character spent his life helping deny freedom and democracy to ordinary people. But the book might also encourage the reader to explore further the forgotten radical history of Britain, that is just as exciting as any novel can make it. That said, A Very English Agent is well written and quite amusing in places.
Posted by Resolute Reader at 3:42 pm