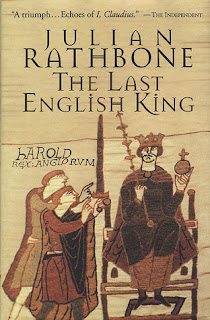 Walt, the last surviving bodyguard of King Harold, roams Europe in the aftermath of William the Bastard's invasion of England in 1066. As he does so, mourning the fact that he survived and failed to die defending his monarch, he joins a growing band of travellers whose interwoven tales explore the background the death of the "last English king".

Brilliant evocative of the Anglo-Saxon and Norse world, this is by far the best Julian Rathbone novels I've read. Unashamedly he uses anachronism to illuminate the story, or at least make the reader chuckle, but behind the story and the humour is an exploration of a version of feudal society - one were the peasantry supported their lords through thick and thin, because they would provide when times were hard. It is,  modern retelling of the myth of the Norman Yoke, the idea that before the Normans there was a mythical past were the land and people were one.

There's elements of the Canterbury Tales here of course, and as Walt and his companions exchanges stories, and we learn more about the world beyond England's coastline, we are drawn into a continent on the cusp of great change - Muslim armies threaten the Christian kingdoms, traders and explorers bring news of wider places and ideas are in foment.

But the myth of England before the Conquest is matched for Walt, by the reality of his own life before the Battle. His post-traumatic feelings are gradually, though never-completely, healed as he and his companions make their way towards the Holy Land. Historians no doubt will find much of fault here. Was King Edward the Confessor really gay? Was William really an insane, near idiotic, psychopath? It doesn't really matter, because the story is an highly enjoyable account of a key year of transition in English history, centred on Walt but telling a much more traumatic tale. Highly recommended.