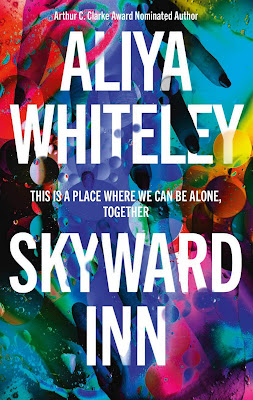 Skyward Inn opens in the pub of an unassuming, low technology village in Devon sometime in the future. It's clear that something has happened to Earth which means that the inhabitants of the village and the pub's drinkers are reduced to a barter economy. Highly localised the village is cut off, and there are ominous warnings about quarantine. The pub is run by a resident alien from the planet Qita. The barmaid is a returned explorer who was one of the first to visit the planet as humanity arrived to share knowledge and resources. A few years later Qita has its share of Earth mining plants and its not clear who is sharing what, and how willingly.

So this is a book very much of two halves. The opening half is so slow and the characters unappealing, that I almost gave up on several occasions. The latter half of the book picks up, as we learn that the aliens that humanity have encountered are up to something. Our adolescent runs away and goes to Qita, though the timelines are confusing and the reader needs to keep a close eye on what's happening. Back at home, and on Qita, though at different and the same time, sudden changes take place that transform the people of Devon, Earth and the Qitan's too.

It's an intriguing setup, that reminded me a little of John Wyndham's Chrysalids and its certainly unsettling in that way that science fiction which tries to push boundaries beyond human frameworks should be. But its all too disjointed and there are some big questions left unanswered. The ending felt a little forced and I remained confused about what was going on. The last couple of pages were a mystery. Avoid it if you like your novels more literal.

Posted by Resolute Reader at 5:58 pm