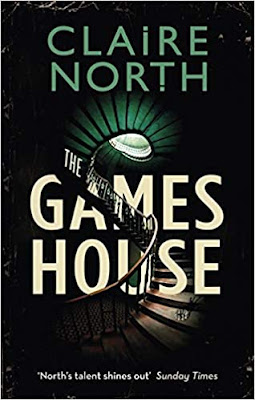 The Gameshouse is based around an intriguing premise. The titular building is host to many different games - ones of chance like cards, ones of skill like chess and higher games, of increasing complexity, played on boards that range in size from cities to nations or even the entire world. The aim of the game might be to overthrow a king, or place a particular "piece" on a throne. The prize might be money, power and influence, or it might be something more fundamental - your health, your partner or a few years of your life. One player loses his name, another his memories. A few of the players seem to become immortal and its indicates that the Gameshouse has always been there and has entrances in many parts of the world simultaneously.

Few players ever make it to the top, those that do, build up networks of pieces and assets that they can call on. Losers who owe them debts incurred in earlier games. In more complex games the players can call on these, and the challenge is often to neutralise your opponents pieces before they can deploy them. The Gameshouse has existed through history and on occasion the gamemaster is challenged for supremacy. During these games the house shuts down and the world is racked by violent convulsions as players fight for control.

It is an intriguing book, and Claire North utilises her talents for unusual ideas well. Based on three novelettes, the first covers a minor skirmish in the 17th century for control of Venice. The second is a game of hide and seek through the forests of Thailand in the 1930s. Its a gripping tale of near misses and careful use of resources. Sadly the finale, which brings the first two parts together is disappointing. Much of it is essentially a game of hide and seek - though this time global in scope - as one player challenges for control of the gameshouse, using several centuries of resources to fight his battles.

Unfortunately while I enjoyed the story, it felt rather fake. Perhaps this is because the idea of historical forces being the whim of individual gamers didn't really work, especially as I read it in the week that machinations between Russia and Nato had led to war in Ukraine. That said there are some clever ideas and some entertaining moments - a game of battleships that turns out to use real vessels, a game of risk that doesn't use a board. Unfortunately the central premise didn't hold it together for me.

Posted by Resolute Reader at 11:29 pm