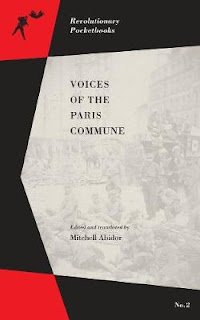 In March 1871 the workers of Paris seized control of their city and declared the Paris Commune. It was an event that through its radical, democratic organisation directly challenged capitalist society, likely prevented a return of the French monarchy and transformed how revolutionaries understood state power and the nature of a workers' state. Writing for the fortieth anniversary, Lenin wrote that the "cause of the Commune is the social revolution, the cause of the complete political and economic emancipation of the toilers. It is the cause of the proletariat of the whole world. And in this sense it is immortal.

Remarkably we have many accounts of the Paris Commune, from participants, observers and supporters and its opponents. Mitchell Abidor's short volume contains such "voices" in an attempt to give a flavour of events. Unfortunately while I found the collection interesting it was hampered, in my view, by an emphasis on the legacy of the Commune and some of the internecine debates within the revolution. A large chunk is devoted to the debates among the elected leadership about the Committee for Public Safety, which a section of delegates saw as a massive concession to undemocratic and authoritarian practice. The discussion takes a form of reprints from the Commune's journal and as such is difficult for non-experts to follow unless they have a grounding in the debates. I felt this needed far more from the editor to explain context and personalities.

The second part of the booklet reports extensively from the inquiry into the Commune and as such focuses on the legacy of the Commune and the activity of the participants. Again this skews things towards internal debates (which are of course important) such as what to do with hostages etc. Disappointingly most of the respondents discuss the failings of the Commune and its leadership - not seizing the bank, not marching on Versailles. This has the effect of making the Commune feel dry and top down - I'd have welcomed more quotes that gave a sense of the revolutionary zeal at the bottom of society. There is also a surprising level of cynicism, or perhaps disappointment, from more than a few voices as they look back on events. Perhaps that's a reflection of the appalling counter-revolutionary violence inflicted on the Commune in its final weeks, violence that had the effect of bringing together the different factions in the defence of the revolution. As one member of the Commune, J. Martelet, is quoted here as saying, "We found ourselves side by side during the terrible Bloody Week, majority and minority, fighting with the same ardor until the final day of the fight, defending together with the same faith the rights of the working people."

Merriman - Massacre: The Life & Death of the Paris Commune of 1871
Gluckstein - The Paris Commune - A Revolution in Democracy
Marx – The Civil War In France
Greene - Communist Insurgent: Blanqui's Politics of Revolution
Jaurès - A Socialist History of the French Revolution

Email ThisBlogThis!Share to TwitterShare to FacebookShare to Pinterest
Labels: France