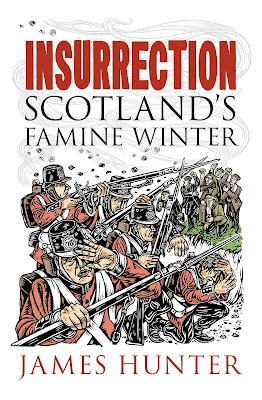 In 1846 Scotland's potato crop failed. It was destroyed by the same blight that had wiped out the crop in Ireland. In Ireland millions starved, while boatloads of food were sent abroad for export. In Scotland the potential disaster was just as great. Thousands of families relied completely on the potatoes they could grow for food. Just as in Ireland an excellent cereal crop could have fed ordinary people yet almost all of it was destined to be shipped elsewhere for massive profits.

The story of the Highland Potato Famine has not been told as frequently as events in Ireland. This is a shame because events in Scotland involve heroic resistance by ordinary women and men, that forced food exports to be halted and government action to relieve the suffering of the population.

Insurrection tells the story of this resistance. While the book was only published in 2019, it's roots lie in James Hunter's early discovery of archive material relating to the famine and the rebellions. It has taken him nearly fifty years to turn these records into a book. But the wait has surely benefited from his long career exploring Scottish history. The story focuses on events in a narrow period of time and place, but are rooted in broader history - a tale of clearances, emigration and class struggle.

It is incorrect to say that potato blight caused the Irish or Scottish potato famines. The blight destroyed that crop - but it was the economic and social relations which meant that hungry labourers could not feed their families. As Hunter explains:

Most of them [Easter Ross crofters] were folk removed from good land to be resettled on worse - often in places where they had no alternative but to carve fields out of bogs or moors that had never been cultivated. A Morning Chronicle journalist, visiting... in the autumn of 1846, spoke with several such crofters whose potatoes, like everyone else's had been wiped out by blight, but whose cereal harvest, that year, had been better than usual. 'It was no relief to tell them that they had a larger crop of oats than formerly,' this journalist reported, 'the answer in every case being, we need all the oats for the factor.' As in Ireland, then, Ross-shire's small-scale agriculturalists could only meet their landlord's rent demands by selling all their grain. Hence the Morning Chronicle man's discovery that 'the constant anxiety of these people is to grow as much oats or barley as will pay the landlord' - they themselves, together with their families, subsisting on the output of potato plots that, in 1846, were largely bereft of potatoes.

As the famine grew, and food and money ran out, in many places mass protests took place to stop the export of cereals. What is remarkable is the scale and organisation of these protests. In some cases thousands of men and women blocked roads to prevent carts taking cereal to harbours. Ships were blockaded by fishing vessels, harbour pilots refused en masse to guide ships and women and men protested for hours until food was withdrawn from export. In many cases the exporters agreed to sell the food to local people for appropriate prices. This last point is worth highlighting as it has many links with the "Moral Economy" described by EP Thompson in 18th and 19th century food riots. Protesters did not, it is repeatedly emphasised by authorities at the time, resort to stealing food. Instead they insisted it was sold at an appropriate, and affordable price. The famine had caused huge inflation, and the poor and hungry couldn't afford the food so they organised for the food to be sold at the correct rate. The only people who lost out where the capitalists. Hunter gives numerous examples, for instance:

It would be a day or two... before military assistance could reach Moray from Fort George. In the interim, [Sheriff Innes] also knew it would be necessary for him to organise the withdrawal of his battered and demoralised special constables from Burghead. The means of doing this were provided by the arrival on the scene of a man described as a 'senior fisherman in Hopeman'. This was John MacPherson.... MacPherson had walked into town to discover he said, 'stones flying in all directions and the windows of the inn smashed into pieces'... MacPherson managed to gain access to the sherrif and, in effect, open negotiations with him. These talks centred on two demands voiced from among the crowd outside. The first was that Innes guarantee that meal would be put on sale in Burghead at a price no higher than 24 shillings a boll.

The second demand was for the freeing of prisoners. The sheer scale of these protests must be emphasised. At one point Wick, and its harbour town of Pulteneytown, were "controlled entirely by 'the mob'." Pulteneytown was a huge working class fishing town, where living conditions, Hunter says, were on a par with those of Manchester as described by Friedrich Engels.

The troops sent into Pultenyetown who used fixed bayonets to clear the harbour so food could be loaded onto ships, faced a mass protest. Hunter quotes eye-witnesses:

'The mob... were... very much excited.' Stones began to be hurled and women in particular started to arm themselves by entering nearby cooperages and picking up wooden 'staves' of the sort used to make barrels. 'They were brandishing [those staves], using very bad language and otherwise provoking the troops,'... 'The mob,' Sheriff Thomson said, 'were highly excited, noisy, tumultuous and threatening.' That was why he had no alternative but to read the Riot Act and 'implore the people, for God's sake, to go home'. This,' the sheriff added, 'they refused to do.' It thus became 'indispensable to clear the streets'.

As a result the troops fired upon the protesters and though no one was killed a bystander was badly injured. These events caused a political crisis for the British establishment and national anger at the soldiers for firing on starving people.

The mass protests, riots, blockades and brave confrontations with the forces of "law and order" were a great success. Hunter argues that these events between January and March 1847 led to "a marked and very welcome improvement in the food supplies available to their communities... prices also fell, often substantially, as farmers and landlords, as well as dealers, were persuaded to give greater priority to closer-at-hand purchasers." It is clear, Hunter shows, that this would not have happened without mass protest.

Longer term, Hunter sees the birth of political organisation that helped the crofters fight for further rights. He argues, contra Eric Richards, that the protest movements in Scotland in 1846 and 1847 demonstrated radical organisation:

The placing of booms across the harbour entrance at Macduff; Buckie and Portgordon people's use of signal flags to communicate with the various coastal settlements between Garmouth and Portknockie; the maintenance for a week or two, of checkpoints on roads leading into Inverness; the blockades kept in place, for a month or more at Cromarty Firth harbours and loading paces like Foulis Point and Invergordon; the handing out of leaflets and the nailing up of placards or posters in Pultenenytown and Wick; these surely show... that organising ability was by no means lacking among men and women drawn from... 'the working classes'.

These movements fed into wider political organisation, and Hunter traces the involvement of Chartists and the eventual creation of the Highland Land Law Reform Association. This, he argues, places the Highland Potato Famine and the mass resistance it provoked, into a wider, radical history of Scotland.

When we read of the Potato Famines we are usually told that they are a story of passive acceptance of fate. Yet Hunter's book demonstrates that this was not always the case, and in parts of the Highlands at least there was a mass movement organised by women and men (and frequently led by the women) in the crofting and fishing communities that refused to allow the people to stave. Insurrection is an inspiring story of forgotten history, I hope that James Hunter's book is widely read and as a result these events become better known throughout the Highlands.

Hunter - Set Adrift Upon the World: The Sutherland Clearances
Devine - The Scottish Clearances: A History of the Dispossessed
Berresford Ellis & Mac A'Ghobhainn - The Radical Rising of 1820
Sutton - Food Worth Fighting For: From Food Riots to Food Banks
Fotheringham, Sherry & Bryce - Breaking Up the British State: Scotland, Independence & Socialism
Hutchinson - Martyrs: Glendale and the Revolution in Skye

Posted by Resolute Reader at 1:50 pm