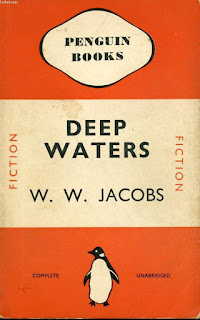 Today W.W. Jacobs is best known as the author of the classic short horror story The Money's Paw. Jacobs was a relatively prolific author and playwright and this collection, Deep Waters, was first published in August 1937. Jacobs tended to write stories were central characters were hoodwinked or bamboozled by events around them, often with a light moral overtone. A recurring character was his nightwatchman who kept an eye on an unnamed wharf, likely on the Thames. Jacob's father managed a dock in East London, and perhaps the author drew from characters and events he had heard about.

In this collection the Nightwatchman by turns tries to make money, or his cheated out of money, or finds himself in difficult situations were he attempts to do a morally right thing, but ends up being blamed by all and sundry, for doing the opposite. Usually his decisions are distorted by his propensity to disappear to the local pub for a half pint during his shift.

Other stories revolve around working class life. There are a couple of amusing tales of the experiences of a householder who puts up soldiers during WW1. Another, rather crude, story is a commentary of strikes as the wives of strikers go out on strike over household work when their husbands are on strike in the factory. It shows little understanding of strikes or working class solidarity.

All of the stories are entertaining, mostly for the insights into working class life between the wars. But the pay off at the end just isn't there. All the tales feel anti-climatic, and thus disappointing.

Posted by Resolute Reader at 12:39 pm