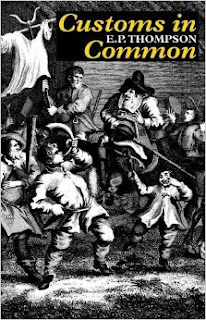 Described as a "companion" to E.P. Thompson's classic work The Making of the English Working Class, this is actually more of a series of essays around the changes that took place in rural and working class communities with the development of capitalism. As such it is very different to Making which had a much more coherent historical narrative and argument. Customs in Common's chapters tackle much more specific issues though this doesn't detract from a very well argument and fascinating book.

Several of these essays have appeared elsewhere. Thompson's essay on Time, Work-Discipline and Industrial Capitalism is a justifiably frequently cited article that explores the nature of time and how it has been marshaled and organised as a result of the interests of developing industrial capitalism. In this, as in other articles, the reader is struck by Thompson's expert knowledge of sources and his expertise in a breadth of subjects. He moves from the Nuer (a Nilotic herding people who I have also noted had a very different attitude to 'time') to the history of clockwork, carrying the reader from one satisfying nugget of information to another while building up a powerful argument. His conclusion - that capitalism imposes a rigid structure of time on a population that had no previous need for it - should come as no surprise to the worker who has experienced the tyranny of the clocking in machine.

However the most important arguments in this book centre on the question of "custom" and how it was challenged and destroyed by the development of capitalism, yet formed a site for resistance to those changes. Thompson writes:


Agrarian custom was never fact. It was ambiance. It may be best understood with the aid of Bourdieu's concept of 'habitus' - a lived environment comprised of practices, inherited expectations, rules which both determined limits to usages and disclosed possibilities, norms and sanctions both of law and neighbourhood pressures.... within this haitus all parties strobe to maximize their own advantages. Each encroached upon the usages of the others. The rich employed their riches, and all the institutions and awe of local authority. The middling farmers, or yeoman sort, influenced local courts and sought to write stricter by-laws as hedges against both large and petty encroachments [etc]... the peasantry and the poor employed stealth, a knowledge of every bush and by-way and the force of numbers.

Such customs and lived experience involved everything from the expectations that people had from landowners and the wealthy, to the right to use land, or cut wood, or hunt animals. They were even, anticipating latter chapters in this book, concerned with how divorce took place and the right of the collective to discipline those who had gone beyond reasonable perceived behaviour in the community.

Two chapters deal with the question of Thompson's famous "moral economy". This is the idea that within struggle, collectives of the rural poor would try to impose a more moral and more rational economic reality on those that grew, traded and sold food and goods. In particular this takes place through the authors famous discussions on food riots. Space (and the current class struggle) precludes a detailed discussion of this here, but a highlight of this book is Thompson's defence of this thesis (and his arguments around the gender question in food riots) in a follow up chapter written years after the first, more famous article.

Too few modern day socialists read E.P.Thompson's classic Making of the English Working Class and I would suggest new readers begin there. Fewer still read this lesser known book, but this collection of writings contain some powerful polemics, and some of the best researched history by a radical historian. Its also laced with wit and fire, with no fear of stepping into modern day critiques of nuclear weapons and Tory governments. For all these reasons I highly recommend it.

Thompson - The Making of the English Working Class
Sutton - Food Worth Fighting For: From Food Riots to Food Banks
Linebaugh - Stop Thief!
Sharpe - In Contempt of All Authority
Hill - Liberty Against the Law
Posted by Resolute Reader at 8:17 pm