Andreas Malm - How to Blow Up a Pipeline 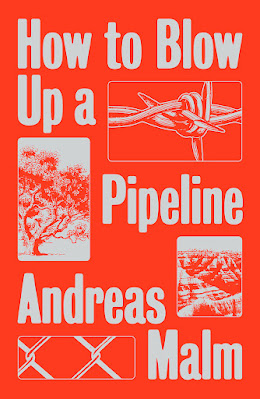 Andreas Malm's book How to Blow Up a Pipeline has provoked intense debate. This is good. Because it is a book about the strategy that social movements need to prevent capitalism's ecological disaster destroying the basis of human society. The engagement with Malm's book indicates a serious desire to discuss strategy and tactics in this struggle. Malm is the author of several other important books, including the essential book Fossil Capital, his 2016 book that looked at the reasons that capitalists adopted fossil fuels, the struggles against this, and its consequences for today.

Pipeline is a short polemic. It's readable and engaging, and has much of interest. Malm's critique of the focus on non-violence from some sections of the movement, and the limited strategies of particular campaigns, such as Extinction Rebellion, are extremely well argued, and have much overlap with my own critique. I emphasise this, because the focus of much of this review will be my disagreement with Malm's specific conclusion - he thinks we should blow up pipelines, and I think this is a mistaken tactic - and I want readers to understand that my engagement with his argument begins from much common ground. This is a question of strategy and tactics and is thus a debate among those who want to stop ecological disaster.

Malm points out that the environmental movement so far has "scrupulously avoided" any activity that "could be classified as violence", saying that the "commitment to absolute non-violence appears to have stiffened".  By violence Malm includes the physical destruction of fossil fuel infrastructure. He is not suggesting the movement should engage in the injury or murder of humans. He says, "thus far, the movement for averting a spiralling climate catastrophe has not only been civil: it has been gentle and mild in the extreme". This has, as has been discussed elsewhere by me, mostly been because doing so would make it harder to engage, motivate and include activists. Malm argues though, that in the face of the growing refusal to act on climate change and indeed the increase in usage of fossil fuels, the movement needs to broaden its tactics.

As I said, Malm's demolition of some of the central tenets of "non-violence" is lucid and important. This review will not cover that in detail, but it is worth quoting some of Malm's points:

The first sweeping emancipation of slaves occurred in the Haitian Revolution - hardly a bloodless affair. As some recall, slavery in the US was terminated by a civil war, whose death toll still remains close to the aggregate from all other military conflicts the country has been embroiled in. If there was one white abolitionist who helped precipitate that showdown, it was John Brown, with his armed raids on the plantations and armouries. 'Talk! Talk! Talk!' he exclaimed after yet another convention of a pacifist abolitionist society. 'That will never free the slaves! What is needed is action - action.'

What is important about Malm's argument is that the obsession with non-violence by some, and the placing of pacifist principles on a pedestal by sections of contemporary movements today, is not just historically inaccurate, it also is a failure to understand why movements of the past - from that against slavery, to the Civil Rights movement and the fight against apartheid - won. Malm's reading of history and academic studies comes to a different conclusion:

As a rule, dictators are unseated by people who first come in peace and then, after running into the iron-clad state, swing sticks, through stones and hurl Molotov cocktails. They call this 'unarmed collective violence'.

Such 'unarmed collective violence' is ignored by some, such as Erica Chenoweth and Maria Stephan whose works have reached near religious significance for some activists.

Malm's engagement with capitalism takes him to the next step of his argument. Here, for the avoidance of doubt, is what he says:

Now the likelihood of the ruling classes implementing a global prohibition of all new CO2-emitting devices because scientists tell them to... is about the same as them lining up at the summit of the steepest mountain and meekly proceeding to throw themselves off the edge.

So here is what the movement of millions should do, for a start: announce and enforce the prohibition. Damage and destroy new CO2-emitting devices. Put them out of commission, pick them apart, demolish them, burn them, blow them up. Let the capitalists who keep on investing in the fire know that their properties will be trashed... If we can't get a prohibition, we can impose a de facto one with our bodies and any other means necessary.

Other than destroying new fossil fuel infrastructure, what is the purpose of this action? Malm points out that activists will not be able to destroy the massive infrastructure that the coal, gas and oil firms have implemented. "At the end of the day, it will be states that ram through the transition or no one will". The point of this mass movement of destruction is for "shaking business-as-usual out of the ruts".

Let us be clear. Malm reaches this argument because capitalism cannot break from fossil fuels. As he points out, the question is not whether we can replace fossil fuels with renewable energy and a sustainable economy, but why the system doesn't make that transition. But as Malm made clear in his masterful Fossil Capital, fossil fuels are locked into capitalist production. The system cannot break from them, because doing so challenges the very basis of their system.

In part this is to do with repression. One can sympathise with Malm's desire to see the sabotage of SUVs or luxury yachts, or even pipelines and wider infrastructure. But threatening private property like this, even by large groups, is likely to bring down vicious state revenge and will not drive systemic change within fossil fuel capital.

So in the face of this the movement has to look for other strategies, and here I think Malm's earlier Fossil Capital is a useful guide. Because in this Malm shows the centrality of fossil fuels to capitalist function and their key role in allowing the capitalists access to their source of profit - workers. In fact  through Fossil Capital runs class struggle - the protests, and particularly strikes, of workers as a key force for stopping capitalist production. Because what is missing from Pipeline are organised workers. The obsession of socialists with the organised working class is precisely because of their power to challenge capitalism.

But there is a second issue. What is the aim of the movement? Are we simply trying to build a greener, fossil fuel free, more socially just capitalism? Or are we trying to put an end to a system whose accumulation can only drive environmental destruction and exploitation? Capitalism cannot break with fossil fuels, and nor can it change itself. A radical movement, even one based on radical, mass "unarmed collective violence" will not transform capitalism. We have to smash it. The capitalist state will not ram through the transformation we need. Instead we have to build a movement that can defeat the capitalist state, break it and overthrow capitalism creating a new form of production. This new economic system will see production based on mass participatory production. That is where the future lies. The only force capable of doing this is the working class.

Given Malm's politics - he is a Marxist - and his earlier works, it is a major surprise that the working class is essentially absent in his book. Perhaps this is because of the paucity of mass, revolutionary struggles by workers in recent years. Though in his discussion of the Egyptian Revolution, he compounded the mistakes of the non-violent theorists he critiqued by failing to mention the central role of strikes in bringing down Mubarak. But the nature of capitalist exploitation means that such struggles will, inevitably, take place. There in lies our hope.

Malm - The Progress of This Storm: Nature & Society in a Warming World
Malm - Fossil Capital
Ackerman & Duvall - A Force More Powerful: A Century of Nonviolent Conflict
Chenoweth & Stephan - Why Civil Resistance Works
Ahmed - Mohandas Gandhi: Experiments in Civil Disobedience
Extinction Rebellion - This is not a Drill
Trotsky - Terrorism and Communism

Posted by Resolute Reader at 6:29 pm