T.M.Devine - The Scottish Clearances: A History of the Dispossessed 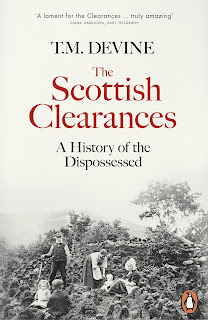 I had the pleasure of reading Tom Devine's new book The Scottish Clearances on holiday on the Isle of Mull, near where, it turns out, he wrote at least some of the book. It is a sobering experience when you look out on the landscape which he describes in the introduction like this:


The Scottish Highlands, contrary to the image projected in countless tourist brochures, are not one of the last great wildernesses in Europe but in many parts can be more accurately described as a derelict landscape from where most of the families who once lived and worked the soil are long gone.

This history is never far from view in the Highlands. The region is littered with abandoned homes, farmsteads and villages. Devine explains that contrary to much popular belief, it is wrong to see this "derelict" landscape as the product just of the infamous Highland Clearances, but rather of an extended process of change that took place across Scotland. This change has been neglected in both academic and popular history, and Devine's book aims to rectify this. Devine explains the broader context:


The Scottish experience of rural transformation was a national variant of broader developments in Europe. A primary determinant across the Continent and in Britain as a whole was a sustained revolution of increasing population which soon generated immense pressures on traditional modes of food production... different nations and regions took a wide spectrum of roots to agrarian modernisation... In Scotland, and much of mainland Britain, the pattern was different again with landed magnates deploying their power to introduce far-reaching changes from above. Some of their decisions resulted in dispossession of traditional rural communities on a large scale.

This is a detailed work of history, and space precludes a summary of much of the book. Devine's account of the evolution of the clan system in the Highlands is one of the clearest I've read, and sets the context for the behaviour of both the landowners and the mass of the population later in the book. But Devine argues that by the early to mid 1700s, at least for some of the chiefs, "the ethic of clanship was already being subordinated to the pursuit of profit." In the aftermath of the 1745 rebellion it was the "pacification" of "Gaeldom" by the British Crown which effectively led "many of the elite entirely to throw off this historic responsibility in favour of the material advantages of proprietorship, so completing the transformation to landlordism." It is this that sets the context for all the later agrarian developments in Scotland.

Scottish agrarian history can be loosely understood by breaking the country into three parts - the Borders, Lowlands and Highlands. For geographic and climatic reasons the areas differ a great deal, but also have many similarities and Devine argues that the divergence between Highland and Lowland agriculture begins through the 17th century.

The border country however was the first to suffer "improvement", something Devine describes as a "forgotten history". He writes that:


Two generations or more before clearances began north of the Highland line, the dispossession of many tenants and cottars was already under way in the hill country of the Borders...in a social revolution which has long been mainly ignored. The proximate cause was the expansion of large sheep farms, often with flocks averaging between 4,000 and 20,000, and the parallel growth in ther districts of extensive cattle ranches.

Devine's detailed exploration of why this takes place - best summarised as the desire for landlords in a developing capitalist economy to make more money - is brilliantly researched and reported. He never forgets that the development of the economy and the improvement of agriculture is closely associated with the brutal, forced transformation of peoples' lives. Nor does he neglect the resistance to this. One thing that marks the book (and has been noted by other authors of Scottish agrarian history) is the role of song and poetry in recording the impact of the dispossession. Here's one ballad responding to the changes:

The lords and lairds may drive us out from mailings [tenant farms] where we dwell
The poor man says: 'Where shall we go?'
The rich says: 'Go to Hell.'
These words they spoke injests and mocks
That if they have their herds and flocks,
They care not where to go

While discussing the "Leveller's Revolt" in the 1720s, Devine makes an important argument against those 18th century commentators and some historians today. He argues that resistance (such as mass protests against enclosure including the levelling of fences and hedges) was not "simply conservative" and against all innovation. Rather protesters were against "large-scale enclosing of cattle parks and the effect this had on the common grazing ground and arable lands of the small tenants". This is a point that also applies to rural protesters during similar changes in England, where protest was more about protecting existing rights rather than opposition to all change. The agricultural poor where, by and large, ignored when landowners decided to "improve". Though it's worth noting the Devine highlights a number of occasions when landowners did not do this - either through a remnant of a belief in responsibility to their tenants or because they baulked at the dispossession of whole communities. In the end this made little difference as their sons usually had few such compunctions.

By 1830 Scotland had dramatically change, but still retained vestiges of the past. In that year most Scots people still lived and worked in rural areas. But, as Devine notes "stress on continuities" hides the "unprecedented social changes" that had taken place in the previous 70 years. While most still worked the land, how they did so had been transformed.


In the Lowlands most of the rural population had already become a landless proletariat who hired their labour power in the market to employers... In the western Highlands a 'peasant' society remained but differed radically from that of the age of clanship... Indeed, social transformation in Gaeldom was more traumatic and cataclysmic than anywhere else in Scotland. The Highlands moved from tribalism to capitalism over less than two generations... Everywhere, large-scale pastoral farming was in the ascendant.

The ruling class in Scotland, Devine argues was "conservative politically" but "revolutionary in the economic sphere". This drove forward capitalist expansion, and destroyed traditional communities and social-relations on a huge scale. The destruction was sometimes explicit and in other times and places "by stealth". Most of the Lowland areas where, for instance, cleared gradually through depopulation and emigration. Thus the actually height of the population decrease is not, as commonly believed, during the Highland clearances, but afterwards as the final transformation of the countryside takes place. Though I must highlight Devine's argument that it was never emigration that depopulated Scotland, rather it was the "internal mobility within the countryside".  People where moving to find work and this they found in "the interaction of village and town development, agrarian specialisation and the spread of rural manufacturing and mining communities".

In England in 1830s there were mass outbreaks of discontent among rural populations, the most well known of which was the 'Captain Swing' movement. This had no echo north of the border. The quietness of rural Scotland at the time was well noted, including by William Cobbett. Devine argues this has much to do with the differences in employment relations. Agricultural workers in England being much more independent of their employers than in Scotland. Their contemporaries he says had more stability and crucially were "guaranteed food and shelter" but this was only provided for those in employment which gives a little incentive to risk unemployment. Contracts in Scotland were longer which Devine argues was partly due to the way that urban industry was competing for workers. Thus a surplus of unemployed agricultural workers in England led to instability. This explanation seems attractive, but I'm not entirely convinced - I think that Swing in England was driven primarily by a response to economic conditions, but also influenced by revolutionary events in France, the Reform movement and a long tradition of resistance to the employers. In other words the situation is much more complex than simply about unemployment rates.

Minor disagreements of nuance not withstanding this is an amazing piece of historical writing. Devine convincingly shows how the development of capitalism in the three differing areas of Scotland created the landscape we know today, and he shows how this led, over a period of centuries, to the transformation of the enormous rural population into wage workers, or emigrants. Devine writes clearly about quite complex changes, but never loses sight of what these changes meant in terms of ordinary people. If you want to understand Scotland beyond the picture postcard images of hills and glens then read T.M. Devine's book.