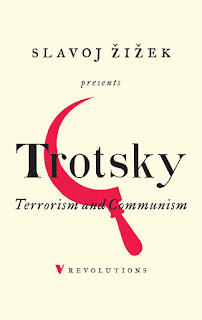 It is fair to say that Terrorism and Communism is not one of Leon Trotsky's greatest works. That stems to my mind from the conditions in which it was written. First published in 1920 it was written in the during the hellish fighting that marked the Civil War in Russia. Following the Russian Revolution of 1917 counter-revolutionary White Armies of former Tsarist loyalists and Imperial troops from a dozen nations invaded Russia to attempt to destroy the Revolution.

Trotsky wrote Terrorism and Communism in part as he led the fight of the Red Army against the Whites. The tension, stress and heart-ache come through on every page of this polemic as he counters those socialists, in particular Karl Kautsky the leading German socialist and former revolutionary, who are effectively siding with the counter-revolutionary armies.

Kaustky argued that the Bolshevik's were wrong to seize power, that the new society was undemocratic, and that the masses in Russia were incapable of running society. His alternative view was that Russian society should have had time to develop it's economy and its democracy and experience a latter transition to socialism. Trotsky dismisses Kautsky as Utopian. The capitalist class aren't willing to give up their wealth, and in fact had engaged in a murderous war to protect it.


As for the bourgeoisie of the victorious countries, it has become inflated with arrogance, and is more than ever ready to defend its social position with the help of the bestial methods which guaranteed its victory. We have seen that the bourgeoisie is incapable of organizing the division of the booty amongst its own ranks without war and destruction. Can it, without a fight, abandon its booty altogether? The experience of the last five years leaves no doubt whatsoever on this score: if even previously it was absolutely utopian to expect that the expropriation of the propertied classes – thanks to “democracy” – would take place imperceptibly and painlessly, without insurrections, armed conflicts, attempts at counterrevolution, and severe repression, the state of affairs we have inherited from the imperialist war predetermines, doubly and trebly, the tense character of the civil war and the dictatorship of the proletariat.

Kautsky himself was no longer the socialist leader he once was,


The imperialist war, which killed every form of vagueness and brought mankind face to face with the most fundamental questions, exposed all the political bankruptcy of Kautsky. He immediately became confused beyond all hope of extrication, in the most simple question of voting the War Credits. All his writings after that period represent variations of one and the same theme: “I and my muddle.” The Russian Revolution finally slew Kautsky. By all his previous development he was placed in a hostile attitude towards the November victory of the proletariat. This unavoidably threw him into the camp of the counter-revolution. He lost the last traces of historical instinct. His further writings have become more and more like the yellow literature of the bourgeois market.

Much of the book is a defence of Marxism and the revolutionary practice of Bolshevism in the face of Kautsky's criticism. There's an intriguing chapter on Marx and the Paris Commune where Trotsky shows precisely how Kautsky had abandoned his Marxism.

But for me the most interesting parts were those were Trotsky, speaking as a leading figure in the Revolution defends the practices of the Revolutionary government. For instance, he defends something that Kautsky is unable to contemplate - compulsory labour. Here is Trotsky:


The very principle of compulsory labour service is for the Communist quite unquestionable. “He who works not, neither shall he eat.” And as all must eat, all are obliged to work. Compulsory labour service is sketched in our Constitution and in our Labour Code. But hitherto it has always remained a mere principle. Its application has always had an accidental, impartial, episodic character. Only now, when along the whole line we have reached the question of the economic re-birth of the country, have problems of compulsory labour service arisen before us in the most concrete way possible. The only solution of economic difficulties that is correct from the point of view both of principle and of practice is to treat the population of the whole country as the reservoir of the necessary labour power – an almost inexhaustible reservoir – and to introduce strict order into the work of its registration, mobilisation, and utilisation.


Trotsky shows how compulsory labour isn't the draconian forced labour that Kautsky and others imply, but it is a system that does direct labour and on occasion, has to use compulsion. But, he points out, this is in the context of the great urgency caused by the economic destruction of Russia by the counter-revolutionary forces. What is interesting, and Trotsky emphasises the point, is that by and large workers (especially former soldiers) tend to be willing participants in the process - this is, of course, because they are part of an entirely new social formation. It's this latter point that Kautsky is unable to grasp - that something fundamental had changed in Russia after 1917 and that the old ways of doing things no longer fitted.

My edition of the book (Verso 2017) contains a useful, if idiosyncratic foreword by Slavoj Žižek. Žižek argues that while it is easy to crudely argue that this book demonstrates a continuum from Lenin and Trotsky to Stalin, in fact Trotsky's method in the book (and Bolshevik practice) is the exact opposite. Žižek makes a note about the "democracy" that Kautsky is obsessed with.


In such dynamic times where the situation is 'open' and extremely unstable, the role of the Communists is not to passively 'reflect' the opinion of the majority, but to instigate the working classes to mobilise their forces and thus to create a new majority.

It's precisely this dynamic that Kautsky cannot grasp, which ends up with him in the Bourgeois camp.

Sadly this isn't Trotsky's best work, in part because it is so polemical and it is very much of the moment. Trotsky is writing at the lowest moment of the counter-revolution and the Revolutionary government is, at times, close to being destroyed. Trotsky's arguments reflect that situation.

That's not to say however that the book is not worth reading. On the contrary, for those attempting to understand the fate of the Russian Revolution, this is powerful argument from one of the leading Bolsheviks in defence of the Revolution whose faith in the revolutionary masses remained undiminished.