Andreas Malm - The Progress of This Storm: Nature & Society in a Warming World 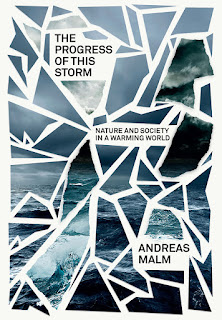 Over the last couple of years there have been intense debates within left ecology about how best to understand the interrelation between society and nature, or even whether there is such a duality as "nature" and "society". Andreas Malm is author of one of the finest studies of the origins of fossil fuel capitalism and his new book is part philosophical study, part polemic and finally a trenchant defence of historical materialism and Marxism as the best tool to understand ecology and the origins of the current environmental crises.

Through the book Malm takes on a whole series of modern philosophical fads, demolishing them with wit and knowledge. In doing so he demonstrates (at least to this reader) that much of philosophy is a set of ideas that bear little relation to reality and offer nothing to those trying to get their heads around the creation of a sustainable future. Malm is an extremely erudite observer shouting "the Emperor has no clothes" at his theoretical targets. Though it must be said that some of these thinkers require little exposing. Take the ideas of Bruno Latour who writes bafflingly "objects have as much agency as persons - for do not hammers hit nails? Do not kettles boil water, knives cut meat" etc. Latour is a highly respected philosopher, but his ideas, when applied to climate crisis aren't simply comical, they become downright dangerous. Latour uses an example of two rivers, one above the other, prevented from intermingling by a human built dam. Malm explains "according to Latour, [this] shows the rivers have goals: the Atchafalaya to swallow the Mississippi, the latter to enter the former." Latour explains, the "connection between a smaller but deeper river and a much wider but higher one is what provides the goals of the two protagonists, what gives them a vector".

Once you are in the realms of seeing "nature" (or components of nature like rivers) as having agency, goals and "vectors" you are edging out society's role within environmental change. Malm's challenge to these ideas is both systematic and entertaining. But more importantly his alternative proves the clarity of the Marxist approach. He begins by trying to understand how it comes to be that one group of people from one country can extract coal from another, and use it to fuel their country's imperial ambitions. This is not because the coal has agency as some might argue, but because they are from a society that requires fossil fuels to further its interests. As Malm writes when discussing Ashley Dawson's Marxist study of extinction,


One emergent property comes into conflict with a whole planet of other emergent properties. This is the necessary and fundamental form of a Marxist account of ecological crisis, which does not exclude other drivers but centres on a feature unique for capitalist relations: the compulsion for perpetually expanding absorption of biophysical resources. Such a property cannot be found in nature. Any creature that had it would be fantastically maladaptive and quickly go extinct; capital has been able to maintain it into the twenty-first century only by establishing complete dominion over tellurian nature. But it cannot go on forever.

It is thus foolhardy as some academics have done to argue that nature no longer exists, but that society and nature have merged to form one. There is of course value to understanding that humans have always interacted with nature and changed it, Marx made the point that there is no "original" nature left anywhere, with the exception of some newly formed coral islands. But this is not to suggest that nature doesn't exist as separate to the human world. Malm quotes John Bellamy Foster approvingly on this subject, "there is no contradiction in seeing society as both separate form and irreducible to the Earth system as a whole, and simultaneously as a fundamental part of it. To call that approach 'dualist' - in the Cartesian sense - is comparable to denying that your heart is both an integral part of the your body and a distinct organ with unique features and functions."

The danger with an approach that sees nature-society as a seamless whole is that it doesn't allow for nature's autonomous behaviour. Again, as Malm writes "Since capital is a human creation, it follows that nature is intrinsically independent of capital, its production and management and domination - which can, from a capitalist standpoint, be highly unnerving".

As we watch the growing environmental crises, the view certainly is unnerving. As capital is increasingly concentrated in the hands of a few rich individuals, while the majority suffer the ignominy of poverty, and wealth accumulates at the expense of the world's resources and its ecology, radicals need a theoretical framework that blows away the obscuring smoke and empowers the masses of the world the change it. Andreas Malm's book is a fantastic defence of Marxism as that theory and radicals everywhere should read, think through and argue about.

You and Malm seem to be arguing particularly against Jason Moore's view of nature/society. I'd be interested in a fuller exposition of your take on his work. Maybe a review of "Capitalism in the Web of Life"?