Glenn Frankel - High Noon: The Hollywood Blacklist and the Making of an American Classic 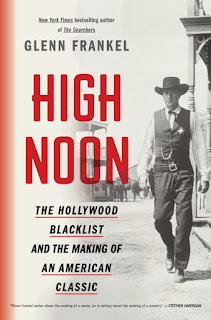 High Noon is, in my opinion at least, one of the greatest Westerns ever. I watched it again while reading Glenn Frankel's fascinating book and I was repeatedly struck by how modern it seemed. The fact there are not just one, but two, strong women leads is unusual for the period and the genre in itself - that one of them was a Mexican actor is even more surprising. The film is incredibly paced - almost every scene has a clock, and as the noon train gets closer the film seems to zoom in, closer and closer, on Gary Cooper, playing Marshal Will Kane. On that train is the killer Frank Miller whose gang will try and take revenge on Kane for his imprisonment. Kane is gradually abandoned by everyone in the town - some who are cowards, some who are scared and some who would simply prefer Miller back.

The backdrop to the making of the film is the second wave of American anti-Communist witch-hunts centred on alleged Communist influence in Hollywood. Carl Foreman, who wrote the screenplay, and was one of the few to stand up to the House of Un-American Activities Committee hearings, was half-way through when HUAC called him in. Frankel's book looks at how Hollywood became associated with the left and what, limited, influence the Communist Party had. Essentially with the end of World War Two, and a strategic alliance with Russia no longer necessary, it became politically useful for the right to run a big red scare. The witch-hunts were appalling, and broke every law of natural justice there is. People lost their jobs, families and livelihoods simply because they had been associated with the left, or were once, however briefly, Communists. A few made retractions, many more named names or swore loyalty oaths and not a few disavowed everything they'd believed in.

But interestingly the Witch-hunts also destroyed the idea that the US was a pluralist society that could accept dissent and criticism. The idea that democracy allowed different views of society was simply cast away. While many individuals suffered, so too did film-making with figures like Carl Foreman leaving the US to making films elsewhere. Films themselves would suffer without that talent or the ideas that inspired them. One "blacklist exile" Michael Wilson, a "thoughtful and unrepentant Marxist" screenwriter who had won an Academy Award for his work on the film A Place in the Sun in 1951 had refused to submit to the HUAC hearing and made the very valid point in a statement that the "consequence of these hearings will be appalling pictures, more pictures glorifying racism, war and brutality, perversion and violence". He was, of course, absolutely right.

There are three strands to Frankel's book - there is the story of High Noon itself, how it came to be, how it was made, and how it was affected by the swirling chaos of the witch-hunts going on around it. The second story is of the blacklists themselves, and the third is the story of Gary Cooper whose late career received and enormous boost from the film (and who got an vast quantity of cash from it too). Cooper was a right-winger, though somewhat naive and surrounded by Hollywood liberals he never quite agreed with it all. Carl Foreman was kicked off the production (though he got a handsome golden handshake) and went on to make some major pictures in Europe. Frankel details the ins and outs of what happened - how Foreman remained unacknowledged following the films blockbuster success and how those involved argued for decades about who was responsible for the final product.

Frankel writes all this well, though I think he is a little too convinced that High Noon is the progressive response to the witch-hunts that he argues it is. In this viewing High Noon is about the hero abandoned by his friends and nearly broken by his experience. There is another, more mainstream view - which explains the film's popularity for some. This is the idea that the individual is more powerful than the collective. That the lone hero can, and will win out, if only he (and its always a he) is brave enough; and finally that such an individual will save society. In this vein it's notable that the film is the one most requested by US Presidents (Bill Clinton screened it twenty times in office!)

When thinking of this interpretation I am reminded of another great liberal film that is often celebrated by the left, but can also be interpreted as a story of the limits of the collective - 12 Angry Men. It is a point also made by Peter Biskind in his book Seeing is Believing. Perhaps the real issue is that liberal politics isn't enough to distinguish yourself from the right in the contested cultural sphere. Whether you like High Noon or not, there's a lot in this book. But fans of the film specifically and the Western genre in general should not miss this.