Glenn Frankel - The Searchers: The Making of an American Legend 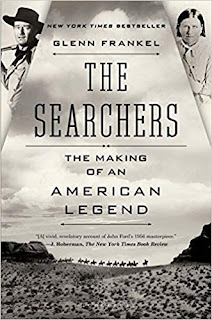 The Searchers is an iconic Western which, in many ways, has come to exemplify the myth of the West itself. A land of huge open spaces, of dangerous environments, of heroic loners and violent, savages. Having read Glenn Frankel's book on the film High Noon which looks at its making in the context of the anti-Communist witchhunts, I was intrigued to see how Frankel examined this very different film.

But Frankel doesn't begin with the film, instead he starts with the history which formed the basis for the myth. In 1836, a Commanche band attacked Fort Parker in Texas killing five or so defenders and capturing five others. Four of these were ransomed over the coming months and years, but Cynthia Ann Parker, who was about 10 when kidnapped spent the next 24 years with the Commanche tribe, eventually marrying a chieftan and having a couple of children. During that time, various people tried to find her, and there were many rumours of her being alive.

The story of Cynthia Ann Parker became the material of legend, but was itself a doubly tragic one. Stolen from her family at a young age, she then became closely integrated with the Commanche community, and was forcibly removed from them as well, in fact only surviving an attack because she was white. Returning to "white society" she remained an outsider and never saw her two sons again. One of her sons, Quanah Parker, became a famed (though unelected) Native American Commanche chief, who became a wealthy rancher and link between Commanche and White communities.

One key aspect of the story of Cynthia and Quanah that is drawn out by Frankel and exists in the movie too (though much less explicitly) is racism towards Native Americans, a racism so explicit that white women who were captured and raped, or even willingly bore children, would be considered beyond the pale to white communities. In the film this shown through John Wayne's character who wants to rescue his kidnapped relative, but only narrowly avoids executing her when he finally finds her - a plan he had had all along. Similar themes are alluded to in another John Ford Western Stagecoach, when as the travellers face capture, a white soldier prepares to kill the woman travelling in the coach.

Racist attitudes to Native Americans pervaded the making of The Searchers and many other films. Interestingly, director John Ford, clearly thought of himself as a benevolent friend of the Navaho who provided the extras for many of the scenes in The Searchers and his other films. Ford paid them relatively well and provided other assistance, for instance leaving the sets up at the end so they could be used for material. Yet the portrayal of Native Americans in this Ford film is extremely problematic - they are savage rapists and must be subdued by the avenging searchers. Frankel portrays a transformation in attitudes to the Native Americas over the period covered - Alan LeMay who wrote the novel the screenplay was based on - himself went through a transition from sympathetic narrator to a more racist portrayal of the Commanche in The Searchers.

But the film remains emblematic, and part of the reason for that must be its racist portrayal of the Native Americas. Ford might have liked to pretend that this wasn't there (and at it's most explicit it's actually played for laughs - witness the scenes with one character's accidental native bride). But it is there and pervades the film through and through.

While I didn't get as much from this book as I did from Frankel's book on High Noon, I did enjoy it, though the material on the actual history of Cynthia Ann and Quanah Parker is much more interesting than that on the making of the film. The figures of John Wayne and John Ford loom large over the production but are less interesting than the victims of McCarthyism behind High Noon.

Frankel - High Noon: The Hollywood Blacklist and the Making of an American Classic
Posted by Resolute Reader at 3:32 pm