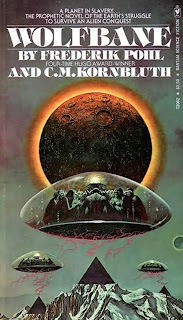 Many years ago, I read, and re-read, Pohl and Kornbluth's classic novel The Space Merchants. It was a remarkable novel that has stuck with me for many years. For some reason though I never moved on to other works by the pair and having finally read Wolfbane, a novel first published in 1952, I really regret that delay.

By any standards Wolfbane is a remarkable book. It is set on a vastly depopulated Earth which has been stolen from the solar system by pyramid aliens who dimly illuminate the planet with an artificial sun that gradually diminishes. The aliens live on their own planet also orbiting their miniature sun, though they are apparently ignorant of the difficult lives of those that remain on Earth. The humans that remain, descendants of those who survived the enormous crisis that followed the planet's removal from solar orbit, have succumbed to a passive existence based on tightly controlled rituals, strictly regulated social interactions and a lack of emotional engagement with others.

In this strictly controlled atmosphere many individuals appear to go insane, or rogue. Known as Wolves they are punished by execution, but they consider themselves to be far superior to the ritualised sheep. The Wolf at the centre of the novel, Glen Tropile, manages to break out of his imprisonment following his discovery. Fleeing, he in turn finds a community of wolves who are living a superior lifestyle under the alien's radar and those of the rest of humanity - here is more food, technology and a better society. But this is in turn disturbed by Glen's capture and translocation by an alien to the Pyramid's homeworld. Here Tropile leads an unusual revolution. He is reincarnated as a component part of a collective being, one of thousands that help maintain the alien planet. The rebellion that he/their lead is a remarkably written account that seems to predict future networked technologies and, perhaps, some of the cyberpunk genre.

For a novel written over 60 years ago, this is still incredibly fresh. It has interesting things to say about society, rebellion and environmental disaster, as well as an innovative plot. I'd highly recommend it.