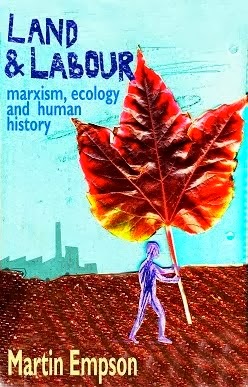 My first book, Land and Labour: Marxism, Ecology and Human History, was published by Bookmarks Publications in early 2014. The book is an attempt to look at the changing ecological relations that human societies have had throughout history, to better understand the growing environmental crisis that we face today. In it I argue that we will need revolutionary change to once again transform our relationship to nature. The book looks at ancient environmental crisis, the development of agriculture, class society and how Marxism can be a tool to help understand these.

The book has been reviewed in a number of places and this page collects them together.

Ian Angus, the editor of the Climate and Capitalism online journal wrote

“In this very readable book, Martin Empson puts today’s global environmental crisis into historical context, showing how humanity has used and abused the rest of nature for thousands of years, and how in a few hundred years capitalism has brought us to the brink of disaster. It is essential reading for everyone who wants to know how we got into this mess – and how we can get out of it.”

In December 2013 wrote a piece for Socialist Worker (UK) outlining some of the themes of the book. You can read that here.

Land and Labour was launched in Manchester at an event hosted by the Manchester Museum. A video recording of the launch is here.

Camilla Royle reviewed the book for the January 2014 edition of Socialist Review magazine.

The Australian socialist and author Simon Butler reviewed my book for Climate and Capitalism and Green Left Weekly. His review, which draws out some of the criticisms to be made of Jared Diamond's approach to social "collapse", can be read here.

Green Party activist Derek Wall reviewed Land and Labour in the Morning Star. He wrote that the book

"is an encyclopedic environmental history from a Marxist perspective and it’s one that should be taught in every school because the interactions between human beings and the rest of nature are an important story... But Empson does a good job in showing how Marxism can tell us more about our relationship as a species with our wider environment."

Irish socialist Conor Kennelly reviewed the book in the Irish Marxist Review (PDF) journal and put an Irish angle on many of the historical issues.

Bookmarks is a socialist bookshop and publisher in London and I encourage people to support their work by purchasing my book through their website. Electronic versions can be purchased at the usual outlets.