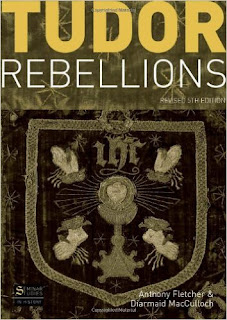 Any student of the Tudor and Early Modern periods is likely to know Anthony Fletcher and Diarmaid MacCulloch's Tudor Rebellions well. You don't need to read much about the 1549 rebellions, the Pilgrimage of Grace or indeed general histories of the period without seeing it referenced.

Despite being a "standard textbook" of the subject, the book is neither dry nor lacking in stimulating analysis. It also contains very useful translations of contemporary documents, particularly useful because material relating to the rebellions is often difficult to access. This review pertains to the extensively revised fifth edition, produced 36 years after its first edition.

The authors' highlight the very different society that was England in the early Tudor period. Much less urban than the rest of Europe, towns were usually populated by only 6,000 to 8,000 people. This, the authors suggest, meant that "personal and political relationships were inextricably confused". They continue that


Expressions of class hatred are mostly isolated outbursts of rage by individuals... Even in time of rebellion the fundamental assumptions of Tudor society persisted: the commons expected the gentry to give the lead. If the gentry closed the gates of their parks and retired to their manor houses the commons went and sought them out. They persuaded or intimidated them into taking their side.

This in fact leads to the somewhat perplexing examples of the way in which the hostile gentry were often won over to lead peasant rebellions, before switching allegiance back to the king and government (or, in some cases, failing to prove their true nature and facing a traitor's death). The Pilgrimage of Grace is a notable case in point, and Fletcher and MacCulloch examine it in detail.

Much of the book is dominated by accounts and analysis of various rebellions, their causes, paths and consequences. Almost all of these are what might be termed rebellion from below - rebellion by the lower orders against one or more aspects of royal or government policy. It is notable the way that the ruling class in the period was extremely wary of upsetting the lower classes, and responses to rebellion often took, at least initially, the form of attempts to mollify or offer concessions. Brutal violence was however never far away. Indeed, the authors note that violence was actually a necessary part of the legal process


The processes of English common law actually encouraged formalised acts of violence, such as symbolic trespass on land, in order to get a legal case started, while in order to get a grievance into the most effective court in the land, [the] Star Chamber, it was absolutely necessary to construct a riot, which might be collusive between the two sides just as much as a random piece of angry violence.

But this pales into insignificance when we consider the violent retribution and punishment that the ruling class imposed on rebels in the aftermath of rebellions such as the Pilgrimage of Grace, the 1549 Western Uprising and Kett's Rebellion.

Forms of rebellion, such as the camps set up in 1549, the "camping time" also had their origins in traditional forms of social organising. The authors note, for instance, simularities between these rebel camps and the "meetings of the assizes" that regularly took place in village life. Tradition hung heavily over rebellion as much as it did over normal life, and there where places, such as St. Keverne in Cornwall, that definitely had a tradition of rebellion through out the Tudor period.

That said though, the ruling class lived in fear of rebellion. When it broke out, they often assumed it was the work of outside agitators, or individuals with particular axes to grind. In reality, causes were much more complex. Many of those engaged in rebellion in 1549 felt that they were doing so inspired by, or with the support of the Lord Protector, who had set himself against the interests of the larger landowners. Repeatedly the demands of rebel camps throughout the period begin by pledging loyalty to the crown, and demand action against corrupt ministers.

I've mostly considered the rebellions of the rural populations here. The turbulent politics of the Tudor period meant that there were other rebellions, particularly in the aftermath of Henry VIII's rule. These reflected the different interests of sections of the ruling classes. I've alluded to the difference in opinion over relations with the rural population and the question of enclosure during the minority of Edward IV. Other rebellions took place as the Catholic and Protestant sections of the ruling class vied for power particularly following Edward IV's early death. The Reformation hangs heavy over the entire period, the Western Rebellion in 1549 particularly being inspired against the introduction of the new prayer book.

But the authors note that the end of the Tudor period and after saw less rebellion from below. This they attribute to the way in which during Elizabeth's rule those who were most likely to lead rebellions, "the yeomen leadership" were "becoming closer to the gentry than to the class below". Their wealth was increasing, and they were more inclined to use lawcourts rather than riots. This can only be associated with the growth of a new section of society who were motivated by capitalist interests. So while the old peasant rebellions might be passing into history, there was a growth of rebellion against enclosure and engrossement, and ultimately there would be a rebellion of a new class against the whole order. Much of this is after the period of this fascinating book, but is very much informed by the history of the Tudor period, and Fletcher and MacCulloch's book is an important introduction to this.

Hoyle - The Pilgrimage of Grace and the Politics of the 1530s
Wood - Riot, Rebellion and Popular Politics in Early Modern England
Duffy - Voices of Morebath
Wilson - The People and the book
Land - Kett's Rebellion
Caraman - The Western Rising of 1549
Posted by Resolute Reader at 4:36 pm