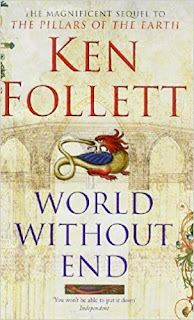 Ken Follett's The Pillars of the Earth is one of the most popular novels around today - a blockbuster that grew famous through word of mouth and has now spawned a TV series and a computer game. Set in the fictional town of Kingsbridge it follows the trials and tribulations of a families as the town's Cathedral is built in the Middle Ages.

World Without End is a sequel set a couple of centuries later, and it is a sequel very much in the same vein. In many regards the book tells a very similar story. Many of the main characters are very similar to characters in the first book, and the story hangs around the building, or rebuilding of part of the Cathedral. The two main characters, Caris and Merthin, are on-off lovers, whose lives revolve around two central issues - the first is the Cathedral, the second the arrival of the Plague. Caris is a young woman who refuses to let her gender hold back her desire to succeed in the world. Accused of witchcraft by a rival, she becomes a nun to escape execution. In the nunnery she uses forward thinking medical practices to treat the sick and prevent infection. Her attitudes and approach incur further wrath from the hierarchy.

As I noted in my review of the first book, the author structures the book like a mini-series or soap-opera. Chapters invariably end on cliff-hangers and characters tend to come and go, revolving around the key people. Again, like Pillars of the Earth, the book focuses very much on working people and their lives though in this case the actual feudal relationship between lord and serf in terms of land use is much more explicit. The rich aren't simply oppressive - they are exploitative too. Follett tries to show how the decimation of the population by disease led to the breakdown of serfdom, though out of dramatic necessity he accelerates the process a great deal. Nonetheless he reflects real history here. I was just disappointed the book finished before the Peasants' Revolt of 1381 when the people of Knightsbridge might have got some collective revenge.

Unfortunately the author tends to imply that the behaviour of the lords against their peasants is based on personality rather than resulting from their position inside society's structure. There were exceptionally cruel lords like Ralph in the book, but all lords had a oppressive, exploitative, violent relationship to the peasantry.

While I enjoyed the book I had two problems with it. The first is the similarities in structure to the first novel. The other is sex. There is a lot of sex in the book, relatively graphic in places, though this isn't particularly a problem. The biggest problem I had was that Follett describes a number of rapes. Follett uses rape as a key plot device - by doing this he is showing the violently oppressive relationship of the local lord to those beneath them. The problem for me is that he describes the rapes much like the sex, and undermines the reality of the actual violence against the women. This marred an otherwise enjoyable, though very long read, which unusually focuses on the lives of those who are normally forgotten in books about the period.

Follett - The Pillars of the Earth
Posted by Resolute Reader at 6:19 pm