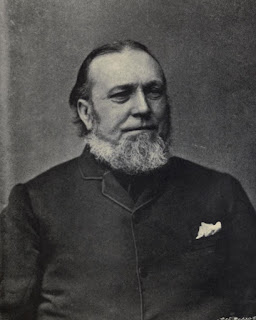 The life of Joseph Arch, agricultural labourer, Methodist preacher, trade union leader and liberal MP, is a fascinating one that Pamela Horn tells with her usual readable and engaging style. Horn notes that Arch was prone to over emphasise his own importance, particularly in terms of the founding and development of the National Agricultural Labourers Union that he helped found. So it is useful that Horn provides a good account of the pre-history of rural trade unionism, and the struggles of agricultural labourers.

The NALU and rural trade unionism in general was a central part of Arch's life. These arose out of necessity - the appalling poverty of rural life, in particular the low wages of agricultural workers. Horn had two strategies for dealing with this. The first was trade unionism, so that workers could come together to struggle for higher wages, particularly through strikes. Secondly, the extension of the voting franchise to male agricultural workers. There were some secondary strategies, one of which was emigration, particularly the United States and Canada. The other was migration within the United Kingdom, usually to urban industry.

Arch was sceptical of socialism as outlined by the Webbs in the late 19th century, but his politics were generally on the left. Like his hero, Gladstone, he was a champion of Irish Home Rule, even when this put him at odds with his core supporters. He was, like most at the time, however more backward about issues such as the women workers, believing they should remain in the family home. He never abandoned the trade union cause, though late in his life he became extremely cynical about workers, feeling they had abandoned him. When Arch was elected an MP he was frequently extremely poor, as MPs were not paid and he had no independent income save a small, irregular wage from the union.

But the main story here is that of the NALU. This rose rapidly, growing on the major outbreak of class struggle - the Revolt of the Fields, that is forever associated with Joseph Arch's leadership. The union grew rapidly and quickly took on a national importance. It's newspaper was read by tens of thousands, even being sold by WH Smiths in the train stations. The NALU won some initial wage rises, though it was part of some bitter strikes. Arch however was prone to personal feuds and sectarianism, both of which helped undermine his position. He was frequently accussed of living a high-life at the expense of his poverty stricken union members. There was some truth to this, particularly as Arch clearly loved being in the lime-light - he was also, in later years, very pleased with the friendship of the Prince of Wales.

The NALU declined with membership falling from a peak of around 86,000 in 1874 to 1,100 in 1894. The decline hurt Arch enormously, though he clearly had no strategy for turning this around other than exorting labourers to join. The decline of the union is clearly related to the decline in class struggle, alongside slight improvements in the economic situation.

Arch's career in parliament was relatively lacklustre. During his first period in office he made an excellent maiden speech (reproduced by Horn) on the condition of the agricultural labourer. Yet in his latter years following his second election, he was remarkably quiet, speaking on only a few occasions. Despite his earlier temperance, Arch became known for heavy drinking in London, and though he clearly loved the limelight and the acquaintance of famous figures, he remained relatively tied to his roots. Only ever appearing in his famous brown suit. Following retirement, Arch lived on a small income from a fund setup by his liberal friends. He was able, probably unlike most of those who had been his union members, to survive to a ripe old age, and his death was in 1919, by which time the English countryside had been transformed once again.

Arch's story is of interest because he, almost by accident, found himself at the head of a mass movement. To his credit he threw his enormous energy and talents into building and strengthening the union movement in difficult conditions. Horn celebrates this, while acknowledging the weaknesses of Arch's personality and politics. We should remember him as a pioneer from whose life we can learn much.