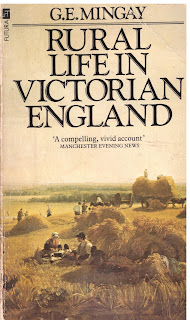 The nineteenth century saw unprecedented change in the countryside. The period of Queen Victoria's rule saw the consolidation of industry and empire, and in the countryside the completion of a process that had begun when capitalism had emerged triumphant from the old feudal order. Enclosure, engrossment and the destruction of common property saw its conclusion in this period, but these processes had really only laid the basis for what took place in these years of change. This is the period when the old traditions died out alongside the old working practices and the rural working population declined from its 1851 peak. As G.E.Mingay makes clear in the introduction to his classic account of the period:


Quiet little country places, which once were disturbed only by the blacksmith's hammerings or the rumble of wagons, now resounded with the clamour of dozens of little nailers' forges or the thud and click of cottage handlooms and stocking frames.. almost overnight, the village's character was changed, and those who knew nothing but farming found themselves outnumbered by factory hands, whose own rural origins rapidly disappeared without trace.

The book documents these changes, but does it through an examination of the different groups that made up village life - the landowning squires, the tenant farmers, the agricultural labourers and the professionals; parson, land-agent, doctor and blacksmith. The period in question saw these groups and the relationships between them fundamentally transformed. One key aspect to this was the way that the growing international economy meant that landowners and farmers had to change their practises, a process accelerated by the great depression of the 1870s. Gentlemen farmers and landowners began to die out. Mingay quotes Rider Haggard:


Today there was a new type of farmer, who, as a rule, began life as a grocer, a village smith or a shoemaker. This person lives on about 10s a week and goes to a sale to buy and old wagon for 50s... On an 800 acre holding he employs about four hands, and sometimes not so many, and is unprofitable to the landlord, the tradesman, and the labourer alike. But after a fashion, he makes farming pay.


With the depression came a breakdown of the old relationship between landlord and tenant. The landlord saw old tenants... throw up leases and depart... The old tenants, for their part, saw that the landlords were powerless to halt the economic decline of farming, and were even unable to offer much in the way of new investment in buildings or help with the expense of converting arable land to grass.

This was a period when a "new kind of farmer... strictly economical and severely business-like" arose, making the depression "a true watershed in the country's farming history".

If the old landowning class and the tenant farmers were being transformed, the agricultural labourers were beginning to see a transformation in their own lives. Readers might detect a tendency for Mingay to see the squirearchy in its most benevolent clothing. But he certainly doesn't hid the poverty and terrible living conditions of the agricultural labourers. Their low incomes, appalling housing, lack of access to education, running water, interior toilets and so on, is detailed in horrible detail. So to are their struggles - the burning of hay ricks and the early trade union movements.

Many, usually those not directly connected to the countryside, saw the solution as being about land.


There was great discussion, much controversy, a few plans, but little action. What did the labourer need to tie him to is village? Clearly he needed better wages, better housing, better conditions - though ti was disputed how bad these really were. Above all he needed land. Look at the continent. There was still a stable and numerous peasantry, having a large share of the soil, and responsible for a large share of its product. Land was the key. It would give the labourer a stake in the country, something to work for, something to stay for. And so came the Smallholdings Acts.

But this wasn't enough. Allotments, smallholdings and the like gave the labourer a bit of extra food. But it couldn't stop poverty. Thus the exodus from the country continued, particularly when industrialisation sucked in more workers. The markets in the local town, and ease of travel by railways, meant that rural workers got a taste for town life. The process was accelerated by the trend towards mechanised farming, the use of technology, chemicals and steam. As a result villages themselves changed, becoming "dormitories and satellites" of the towns which exploded in size.

Traditions, skills and knowledge that had lasted for centuries disappeared too:


The decline in village trades and crafts was perhaps less remarked upon by contemporaries because it was gradual,.. and because at its height it was overshadowed by the great depression in farming itself. But it was much more than a spin-off of the farmers' decline. It was... one of the long-term consequences which flowed from the transformation of Britain into a industrialised and urbanised society. As such, it has not attracted much attention from historians. But it was, nevertheless, highly significant in the rural content, for the going of the miller and the maltster, the dying out of the packman and pedlar and the eventual disappearance of the saddler, wheelwright and blacksmith make their own conspicuous contribution to the decay of the old country life.

But Mingay is no romantic, bemoaning the decline of a traditional life. He understands that these changes are part of a process that arose, in large part, outside of any influence the rural population could have brought to bear. What passed, in large part, was an old hierarchy that was based upon the brutal exploitation of a huge class of agricultural worker. This population had seen its old social relations broken, but the changes that came with Britain's industrialisation accelerated and finalised what was a long term decline.

Drawing heavily on eyewitness accounts this is a fine book indeed. Well written, sympathetic and focusing on the lives of men and women - from squire to reforming farmer, agricultural labourer to blacksmith - its a highly readable account for anyone trying to understand what the history of the countryside really is.

Bell - Men and the Fields
Posted by Resolute Reader at 9:14 pm