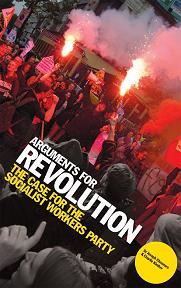 Subtitled, "The Case for the Socialist Workers Party", this is a shamelessly partisan book. It's a book that argues the case for the radical, revolutionary change in society and puts the case that to do so socialists must be organised into a revolutionary organisation capable of shaping and leading that struggle.

Joseph Choonara and Charlie Kimber are both leading activists in the British SWP. This short book by them is a clear and basic introduction to the Marxist ideas that inform the politics and practice of that organisation. There a facts and figures to arm readers for arguments against capitalism, but more than this, it is an introduction to a wealth of ideas that can shape the world.

Capitalism they argue is a system that creates immense wealth, but that wealth is concentrated in the hands of a tiny number of individuals (1011 billionaires) who have spent the last few years doing very well out of the economic crisis. This wealth could provide for the needs of everyone on the planet, yet is used not in the collective interests of people, but in the interests of that tiny elite and the system they represent.

Starting from the nature of the very system, the authors show how capitalism isn't the usual way for humans to organise society. The exploitation at it's core, the systematic extraction of surplus value from the mass of workers, simply didn't exist in earlier societies. The drive for profits, the accumulation of wealth that is the motor of the dynamics of capitalism is also the cause of its periodic economic crises (on average every 6.3 years in the US) and what drives the capitalists to constantly seek to cut pay and conditions and undermine the welfare state.

The authors show however the way in which capitalism creates in the words of Karl Marx, its own "gravediggers". The working class who have the power both to overthrow capitalism and create a new socialist society based on collective democratic society. But the workers don't simply have this importance because of their economic power, they quote Engels; who pointed out that the working class "cannot emancipate itself without abolishing the conditions of its own life. It cannot abolish the conditions of its own life without abolishing all the inhuman conditions of life of society today which are summed up in its own situation".

The working class, through the revolutionary struggle throws off the muck of ages and creates the democratic bodies that can form the basis of a new society. The capitalists don't however roll over, they have a myriad of ways to protect their interests, the authors again tackle the question of the state who protect class rule and explain how the Marxist attitude to the state differs from that of say the Anarchists. The look critically at the historic role of the British Labour Party - a reformist organisation that whenever it has been tested has propped up the system rather than side with the interests of the workers. They also look at the way the working class is divided by sexism, homophobia and racism.

Finally the sections on revolution look at the Russian Revolution and how it was distorted and defeated by the rise of Stalin, rescuing as they do so, the sense that socialism has to have the concept of the "self emancipation of the working class" at its heart.

This short book covers a tremendous amout of ground. There will be many socialists who think they know it all and have heard it all before. In a sense this is true but refreshing old arguments in the context of new, emerging struggles is always important. But this book is one to be read, passed on and distributed far and wide. At the beginning of 2011 capitalism offers millions of ordinary workers a bleak future. The only hope is the struggle of working people to challenge the power of capital. This short book with its extensive further reading list is a guide to new activists, young and old, about how to do that.

(Find out more via the Facebook group or purchase online here)